Review: A Poison Dark and Drowning by Jessica Cluess 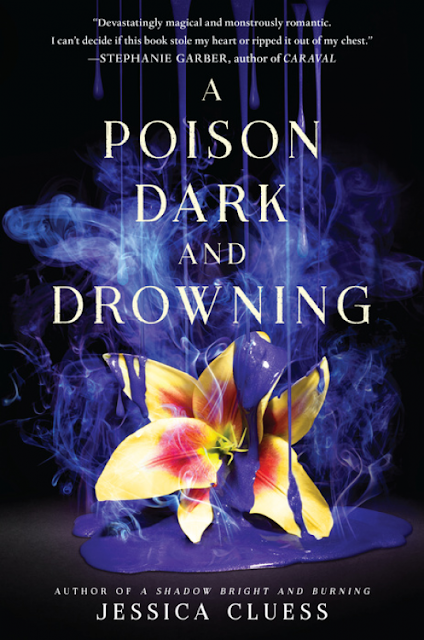 The magicians want her to lead. The sorcerers want her to lie. The demons want her blood. Henrietta wants to save the one she loves. But will his dark magic be her undoing?

Henrietta doesn’t need a prophecy to know that she’s in danger. She came to London to be named the chosen one, the first female sorcerer in centuries, the one who would defeat the bloodthirsty Ancients. Instead, she discovered a city ruled by secrets. And the biggest secret of all: Henrietta is not the chosen one.

Still, she must play the role in order to keep herself and Rook, her best friend and childhood love, safe. But can she truly save him? The poison in Rook’s system is transforming him into something monstrous as he begins to master dark powers of his own.

So when Henrietta finds a clue to the Ancients’ past that could turn the tide of the war, she persuades Blackwood, the mysterious Earl of Sorrow-Fell, to travel up the coast to seek out strange new weapons. And Magnus, the brave, reckless flirt who wants to win back her favor, is assigned to their mission. Together, they will face monsters, meet powerful new allies, and uncover the most devastating weapon of all: the truth.

After falling into this dark and magical world in book one, I couldn't wait to get my hands on the sequel. I loved the characters and wanted to see how they would grow and where the author would take us next. And while I enjoyed the story once again, I must say I'm a bit disappointed with the situation of Henrietta and Magnus. I absolutely loved the latter in the previous and wanted so much more for his character, sadly it seemed he was ignored for the most part of the book, even though he was still very much present.

Yes, I know readers don't always get what they want, but I could have sworn things would have taken a different turn in this book. I definitely did not expect how it went with Blackwood. Maybe I missed something previously but his character had me confused, and I just couldn't understand why Henrietta would react in that way toward him. But anyway, we'll see how it goes in the third book because there were certain revelations that became clear about Blackwood's character and I'd like to see how he develops further.

Speaking of development, I think Henrietta has grown somewhat, but still has ways to go. After all, she's a teen. They're all young adults who have to put up a strong front and take on a horrible situation such as fighting horrific creatures. Henrietta did have naive ways about her but like I said, she's still a teen girl figuring things out. And the whole thing with her childhood best friend is quite sad, but I honestly never felt like it was the type of love you feel in a relationship. Not in the way Rook or Henrietta believed. I think it's because both grew up together leaning on each other and had developed this sense of reliance. Indeed, they had a special bond. But as for being in love, I don't think either truly felt that or even understood what that was.

The topic of love and character growth aside, I liked how there was some more inclusion of adventure, finding powerful weapons, learning more about the ancients and Henrietta's ties to one in particular, and also the introduction of Maria. She's a lovely character. I figured her out right away so it wasn't a surprised for me when the truth was unveiled, but I still loved her presence throughout the story and the blossoming friendship between her and Henrietta. Maria is another one I'm looking forward to learning more about in the next book.

In conclusion, A Poison Dark and Drowning continued the intrigue and reinforced my interest in the story. Once again, great writing from Jessica Cluess. She had my emotions all over the place. I liked how she kept it dark and twisted, but still gave a few moments of vulnerability and lightheartedness. It is a series I'm not sure I want to end, and with Henrietta facing such turmoil, I'm anxious to find out how she will overcome. What will happen next with her and the other characters, especially Magnus? I'm hoping he will return because he definitely has a sweet spot in my heart. If you haven't started this series I highly recommend you do asap. You'll enjoy it!

About the Author
Jessica Cluess is a graduate of Northwestern University and an unapologetic nerd. After college, she moved to Los Angeles, where she served coffee to the rich and famous while working on her first novel. When she’s not writing books, she’s an instructor at Writopia Lab, helping kids and teens tell their own stories.