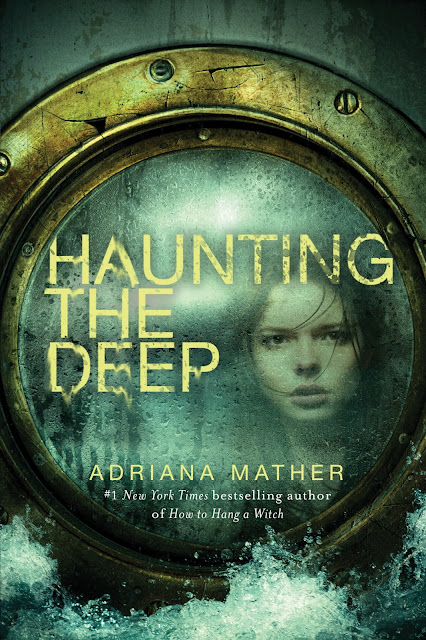 Haunting the Deep turned out to be quite engrossing. Adriana Mather delivered an enthralling story that blended a great event in history with ghostly elements and the urgency to solve a complex mystery.

After seeing news about a follow-up to her first release, I was curious as to where Mather would go next with the story and the descendants. In Haunting the Deep, the premise pulled me in from start. First of all, it was a delight that Sam's father had recovered and was now home with her. His presence in the story was significant to me because I truly got to understand his character better and his reasons for wanting to stay away from Salem. I loved the relationship he had with his daughter and his friendship with Mrs. Meriweather and Jaxon. He's such a likable character and I want more of the father-daughter moments.

So now, on to the main story-line. Sam's trying to move on from what happened with her wicked stepmother, along with trying to cope with seeing spirits. Neither of those things is working out for her. When life gets even stranger, she finally caves and decides to reach out to the other descendants for help. But things go awry. Spells get messy and objects and spirits connected to the Titanic begin to physically affect the girls, especially Sam, who finds herself on the historic ship on certain occasion. These moments pull her further away from reality and more into a curse that the descendants cannot seem to break.

I was super excited that Elijah came back. I know he's a ghost and should move on, but you can't help your emotions and the connection between him and Sam is just too beautiful and real to say goodbye to. He did all he could to help the girls uncover the identity of the spell caster and their link to the Titanic. And in midst of everyone being caught up in unraveling this chilling mystery and trying to understand the objects, I was completely immersed in all the history and how well Adriana fused everything together to make such an interesting story.

I must say though, that while I did like the author's previous release, How to Hang a Witch, I did have some issues with it and found that one issue, in particular, has appeared in the sequel as well. There were times I felt like things were a bit draggy and could have moved along at a faster pace. Also, there didn't seem to be enough spells and witchery, but I guess the whole mystery with the ship and the warlock was a giant spell in itself. However, those two things were minor and didn't throw me enough to not enjoy the story. The writing and overall plot were too intriguing to not keep going. And I loved that it was a surprise for me once the warlock was identified. I had never suspected that character so I liked how the ending wasn't predictable.

With that said, I'd love for Adriana Mather to keep going with this series. It's just really interesting and I enjoy the creepiness of it all. And maybe I had interpreted inaccurately but I could've sworn at the end of this book she hinted that there could be a third? Either way, I love her writing and will always look forward to her next.

About the Author
Adriana Mather is the 12th generation of Mathers in America, and as such her family has their fingers in many of its historical pies – the Mayflower, the Salem Witch Trials, the Titanic, the Revolutionary War, and the wearing of curly white wigs. Also, Adriana co-owns a production company, Zombot Pictures, in LA that has made three feature films in three years. Her first acting scene in a film ever was with Danny Glover, and she was terrified she would mess it up. In addition, her favorite food is pizza and she has too many cats.