Review: Sky in the Deep by Adrienne Young 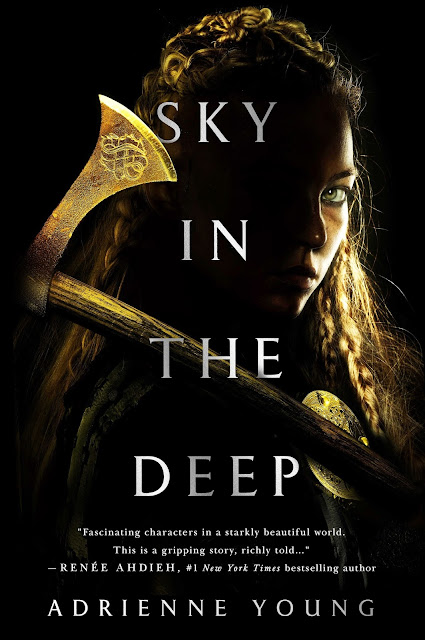 Raised to be a warrior, seventeen-year-old Eelyn fights alongside her Aska clansmen in an ancient, rivalry against the Riki clan. Her life is brutal but simple: fight and survive. Until the day she sees the impossible on the battlefield—her brother, fighting with the enemy—the brother she watched die five years ago.

Faced with her brother's betrayal, she must survive the winter in the mountains with the Riki, in a village where every neighbor is an enemy, every battle scar possibly one she delivered. But when the Riki village is raided by a ruthless clan thought to be a legend, Eelyn is even more desperate to get back to her beloved family.

She is given no choice but to trust Fiske, her brother’s friend, who sees her as a threat. They must do the impossible: unite the clans to fight together, or risk being slaughtered one by one. Driven by a love for her clan and her growing love for Fiske, Eelyn must confront her own definition of loyalty and family while daring to put her faith in the people she’s spent her life hating.

Such a great story. From the characters to the different tribes, this world of war, family, loyalty, and adventure had me invested from beginning to end.

I must start out by saying Eelyn is quite a strong young woman, and her strength was depicted not only when it came to fighting next to her father and other men in her village, but it's also her willpower and sheer determination to survive in the enemy's camp and make it home. Yes, she could be rash at times and put herself and others at risk, but Eelyn was true to her heart and would make that leap without hesitation, something not many could do. I actually liked how fearless she was, some may find her impulsive but in those situations, her reaction was understandable. And although she went through hell at the beginning of being captured, it was interesting how she eased up toward Fiske's family and their way of life. Eelyn is definitely a warrior to the core, but she also showed a softer, vulnerable side to Fiske's little brother and in time towards him and his family. But honestly, if she remained pissed at her brother for the entire story, I'd be okay with that too. In spite of the fact that she also felt guilty about what happened to him and how he ended up with the Riki people.

The relationship between Eelyn and Fiske was a growing one, and there was a lot of tension to break through before their defenses started to fizzle away. But I loved that. The story moved at a steady pace and there was never a lagging moment, but with those two, it slowed down a bit, as if to give them time to allow their true emotions to come forth. And I liked the choices they made at the end because with both being from opposite clans that have warred for centuries, I was concerned with how things would turn out and if they'd give their hearts this freedom to love no matter what.

There's not much else I could say without giving too much away, other than the fact that it was interesting seeing how a mutual enemy could finally unite two warring clans and potentially put an end to a belief, which was crazy to think that people would fight based on something like that anyway. I mean, the fact that they had children learning how to kill and sending them out to war at the age of twelve was truly scary. I doubt I could survive in such a situation. But although I hate wars and people fighting for power or just because they happen to come from different villages, I must say I do like that women are treated equally and are trained and placed at the forefront to fight alongside the men. And this story proves that women can be just as tough and heroic, and not only love and hold the family down. So kudos to Adrienne for delivering such a fantastic and well-written story and I look forward to her next work.

About the Author
Adrienne Young is a born and bred Texan turned California girl. She is a foodie with a deep love of history and travel and a shameless addiction to coffee. When she’s not writing, you can find her on her yoga mat, scouring antique fairs for old books, sipping wine over long dinners, or disappearing into her favorite art museums. She lives with her documentary filmmaker husband and their four little wildlings beneath the West Coast sun.

Posted by Shane @ItchingforBooks at 3:06 PM