Review: Neanderthal Opens the Door to Universe by Preston Norton 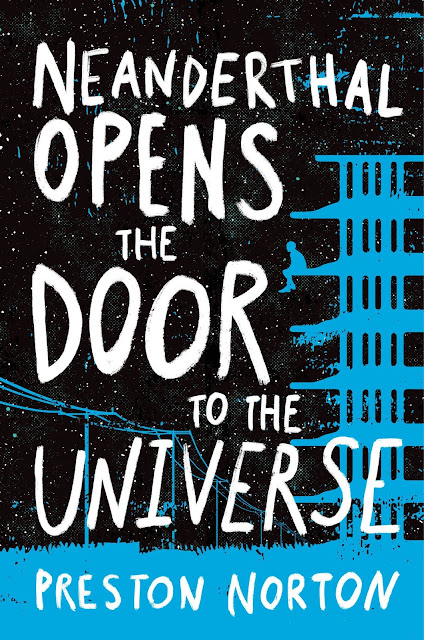 Cliff Hubbard is a huge loser. Literally. His nickname at Happy Valley High School is Neanderthal because he's so enormous-6'6" and 250 pounds to be exact. He has no one at school and life in his trailer park home has gone from bad to worse ever since his older brother's suicide.

There's no one Cliff hates more than the nauseatingly cool quarterback, Aaron Zimmerman. Then Aaron returns to school after a near-death experience with a bizarre claim: while he was unconscious he saw God, who gave him a list of things to do to make Happy Valley High suck less. And God said there's only one person who can help: Neanderthal.

To his own surprise, Cliff says he's in. As he and Aaron make their way through the List, which involves a vindictive English teacher, a mysterious computer hacker, a decidedly unchristian cult of Jesus Teens, the local drug dealers, and the meanest bully at HVHS--Cliff feels like he's part of something for the first time since losing his brother. But fixing a broken school isn't as simple as it seems, and just when Cliff thinks they've completed the List, he realizes their mission hits closer to home than he ever imagined.


*Received a physical ARC from the publisher in exchange for an honest review.

I finished this book almost two weeks ago and have remained iffy about my overall feelings even now. While the story was humorous for the most part, there were times it started to feel draggy and didn't really make sense to me.

In regards to the plot, it was mainly centered around Cliff, his dysfunctional home, and school life, dealing with the loss of his brother, and forming an unlikely connection with Aaron, someone he once hated greatly. Cliff had never felt accepted or belonged, so as crazy as the whole Aaron seeing God and getting a list to make their school better seemed, Cliff became compelled to help.

Speaking of the list, it was another huge focus of the story, and it was pretty interesting. I definitely understood why these two were meant to carry out this mission together. Aaron and Cliff weren't friends, ever. But they bonded over the list by learning about each other and seeing the great qualities each possessed. Aside from the humor, I liked that part of the story and how much their friendship grew while helping one another in various areas of their lives. Aaron especially turned out not to be as bad as Cliff perceived. And I think Aaron needed a friend like Cliff to genuinely point out things he could change or work on.

As for other characters in the book, I thought Cliff's mother should have done better but that's reality with women in those situations. And I cannot criticize because I've never experienced that. But honestly, after losing her firstborn son, her epiphany should've come a lot sooner than it did with Cliff's father, who was a complete moron in every way. I didn't really connect with any other characters, not even Cliff's girlfriend. I disliked how she showed her feelings for him in the beginning. With everything he was already dealing with in high school pertaining to his body and the lack of self-confidence, I thought she could have been nicer and not say a lot of things that she did. But I guess that's just who she was and her personality was as a result of what she'd gone through with her own family.

To conclude, it was a different and all in all good story. Although again, things got a bit draggy in areas where it could have wrapped up a little earlier, I still liked the concept of the list and various messages throughout having to do with self-image, accepting who you are and standing in your own truth.

About the Author
Preston Norton is the author of Marrow, Blud and Magik, and The Lost Son. He has a degree in English Education and has taught seventh and ninth grade English. Preston resides in Provo, Utah with his wife Erin.

Posted by Shane @ItchingforBooks at 4:11 PM