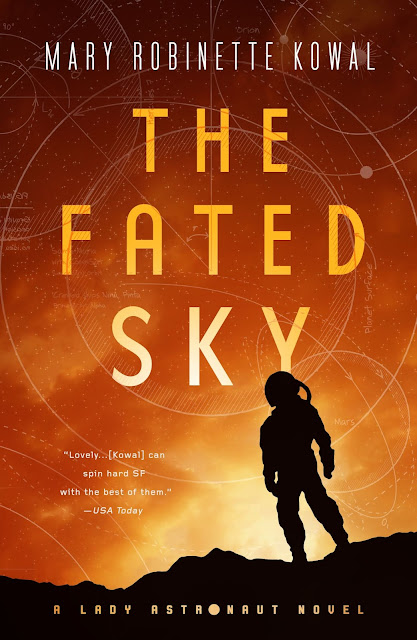 Mary Robinette Kowal continues the grand sweep of alternate history laid out in The Calculating Stars, The Fated Sky looks forward to 1961, when mankind is well-established on the moon and looking forward to its next step: journeying to, and eventually colonizing, Mars.


Of course the noted Lady Astronaut Elma York would like to go, but could the International Aerospace Coalition ever stand the thought of putting a woman on such a potentially dangerous mission? Could Elma knowingly take the place of other astronauts who have been overlooked because of their race? And could she really leave behind her husband and the chance to start a family? This gripping look at the real conflicts behind a fantastical space race will put a new spin on our visions of what might have been.

The thing about wearing a space suit on Earth is that it’s designed for lower gravity. Even being in the Neutral Buoyancy Lab’s pool didn’t change the fact that gravity pulled at me. Sure, it didn’t pull at the suit, but inside it, I slid around every time I changed orientation. As a woman, I was smaller than the men the suits had been designed for, so I had to wear padding around my hips to sort of wedge me in. This kept the air bubble surrounding me inside the suit distributed evenly, allowing me to move from horizontal to vertical over the course of the NBL run without fighting gravity. Without the padding, the air bubble acted like a giant beach ball, strapped to my stomach, always wanting to be pointed up to the surface. It made it difficult to roll any other way.

In truth, having an air bubble inside the suit wouldn’t be a problem in space, but the NBL was where people decided if you had what it took to do a spacewalk. So neither I nor any of the other women would complain. No, sir. Everything was splendid and we were happy to be in the pool.

I hung sideways in the water with the fiberglass shell digging into my armpit. My neck burned from holding my head up inside my helmet. My fingers ached from forcing my stiff gloves to close on the edge of the solar panel we were practicing “repairing.” With the suits pressurized to 4.9 psi above ambient pressure, every movement felt like working against a heavy-duty spring. It wasn’t exactly like working in a vacuum, but it gave us a sense of how exhausting it would be. A wrinkle in my glove felt like a metal wire across my knuckle as the pressure made it rigid. But if you asked me how I was doing, I would have been so very, very chipper. 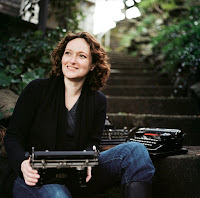 
Mary Robinette Kowal is the author of the historical fantasy novels Ghost Talkers and the five books in The Glamourist Histories series. She is also a multiple Hugo Award winner. Her short fiction has appeared in Uncanny, Tor.com, and Asimov’s. Mary, a professional puppeteer, lives in Chicago with her husband Robert and over a dozen manual typewriters.