Review: Not Her Daughter by Rea Frey 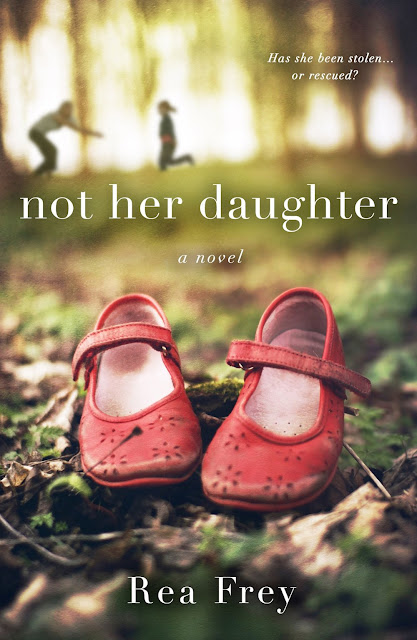 Emma Townsend is lonely. Living with her cruel mother and clueless father, Emma retreats into her own world of quiet and solitude.

Sarah Walker. Successful entrepreneur. Broken-hearted. Abandoned by her mother. Kidnapper.
Sarah has never seen a girl so precious as the gray-eyed child in a crowded airport terminal--and when a second-chance encounter with Emma presents itself, Sarah takes her, far away from home. But if it's to rescue a little girl from her damaging mother, is kidnapping wrong?

Amy Townsend. Unhappy wife. Unfit mother. Unsure she wants her daughter back.
Amy's life is a string of disappointments, but her biggest issue is her inability to connect with her daughter. And now she's gone without a trace.

As Sarah and Emma avoid the nationwide hunt, they form an unshakeable bond. But her real mother is at home, waiting for her to return--and the longer the search for Emma continues, Amy is forced to question if she really wants her back.

Emotionally powerful and wire-taut, Not Her Daughter raises the question of what it means to be a mother--and how far someone will go to keep a child safe.


*Received a paperback copy from the publisher in exchange for an honest review.

A truly incredible story! I was invested from start to finish, so intrigued with the characters and how this intensity would wrap up. It's still so fresh in my mind that I can't even find the words to write a sensible review. For starters, let's see if I can get my thoughts out clearly on Sarah deciding to take Emma.

Okay, you could say Amy and her husband deserved it, they weren't the best parents and Amy was rather abusive, both physically and verbally towards Emma. The poor child was depressed and I could see her growing up to be a broken adult. And I believe during that first sighting of Emma with her family and observing the ill-treatment from Amy, something clicked in Sarah and she could instantly relate, having experienced a similar treatment from her own mother as a child. Perhaps it was fate or just mere coincidence, but spotting Emma again led Sarah into thinking she had to do something to help the little girl. Should she have gone as far as to kidnap Emma? I don't think so. That's wrong in itself, and Sarah based her judgment on the fact that the child protective system was messed up and she didn't believe they'd save Emma from her unfit mother. Whatever the reasoning, kidnapping is never the answer. Personally, I would have reported Amy after seeing the way she treated her daughter and let the authorities handle the situation. But I completely understood Sarah's intentions and saw how the abandonment from her own mother had affected her and possibly caused her to take Emma in hopes of giving her a better life. Also, the immediate bond between Sarah and Emma was quite adorable and so opposite of what both girls had with their mothers. You just couldn't stay mad at Sarah for doing what she did when the two were enjoying each other so much, and I would constantly question myself as to whether or not the kidnapping would change Amy into becoming a better and more loving mother should Emma return home.

Staying on Amy a bit, it was hard sympathizing with the woman. While I'm not a mother, I know how tough it is for mothers and how they are simply doing the best they can. But my gosh, Amy had some seriously deep rooted issues that she took out on her daughter. She seriously needed to see a psychologist. I don't want to give too much away as to how terrible her behavior and attitude toward life in general was, but she pretty much took a lot out on Emma and acted as if the five-year-old girl was out to destroy her when she was, in fact, reacting to the abuse of her mother. And don't let me get started on the father. He was oblivious of a lot and never really stepped up. His attention was mostly given to their younger child so his actions toward the end were totally predictable. Amy often thought to herself how she didn't really want children, but I'm not sure if her marriage would have still worked out had they not been parents, not with the unaddressed issues she had coming into their relationship.

Back to Sarah. It was interesting seeing how much she gave up to save Emma. She initially seemed so career driven so I was a tad surprised. However, in the flashbacks to her relationship with Ethan, she'd often mention becoming a wife and mother. But I wonder if that had to do with the neglect she carried from childhood and desire to do the opposite for her own family? Whatever the case, I was hoping for closure for her and was delightfully fascinated when the opportunity arose. I'm not sure how I would have handled that but I commend Sarah for her strength in facing it. I also would have liked to know how the second encounter went but then the story might have become too stretched.

As for how things turned out in the end, I honestly wasn't expecting that. I'd thought it a bit at the beginning of the story but felt like Amy would've changed somewhat to a point where she deserved a second chance. Either way, I was sort of left in limbo as to how I feel about the ending and had questions as to what would happen next. But I'm also contented with that and draw my own conclusions, for instance, what would Emma think about Sarah and Amy when she got older? Would she hate Sarah for kidnapping her? Things like that will stay with you after reading this book. Kudos to Rea Frey on such an incredible and intense story. The writing is wonderful and consuming. You won't put this down once you've started, and you'll hate for it to ever end. I highly recommend! About the Author
Rea Frey is the author of four nonfiction books. NOT HER DAUGHTER is her debut novel. When she’s not exercising, mothering, adulting, wifing, eating, or writing about herself in the third person, you can find her hard at work on her next book and ghostwriting for other people.

Posted by Shane @ItchingforBooks at 2:19 PM