CAN'T WAIT TO READ: This is What it Feels Like by Rebecca Barrow 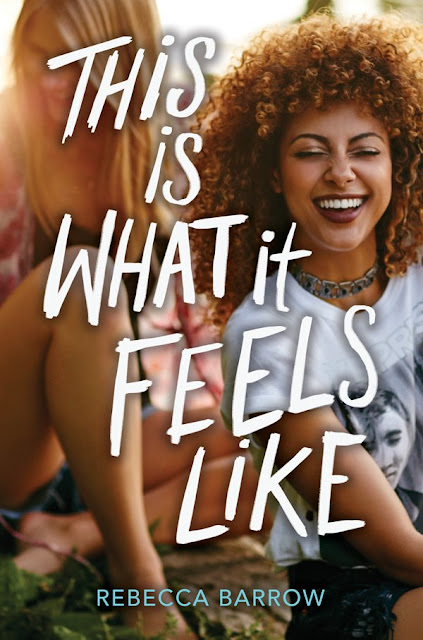 It doesn’t matter what the prize for the Sun City Originals contest is this year.

Who cares that’s it’s fifteen grand? Who cares about a gig opening for one of the greatest bands to ever play this town?

Not Dia, that’s for sure. Because Dia knows that without a band, she hasn’t got a shot at winning Sun City. Because ever since Hanna’s drinking took over her life, Dia and Jules haven’t been in it. And ever since Hanna left — well, there hasn’t been a band.

It used to be the three of them, Dia, Jules, and Hanna, messing around and making music and planning for the future. But that was then, and this is now — and now means a baby, a failed relationship, a stint in rehab, all kinds of off beats that have interrupted the rhythm of their friendship. No contest can change that. Right?

But like the lyrics of a song you used to play on repeat, there’s no forgetting a best friend. And for Dia, Jules, and Hanna, this impossible challenge — to ignore the past, in order to jumpstart the future — will only become possible if they finally make peace with the girls they once were, and the girls they are finally letting themselves be.

Rebecca Barrow’s tender story of friendship, music, and ferocious love asks — what will you fight for, if not yourself?

Rebecca Barrow is the author of You Don't Know Me But I Know You. She writes stories about girls and all the wonders they can be. A lipstick obsessive with the ability to quote the entirety of Mean Girls, she lives in England, where it rains a considerable amount more than in the fictional worlds of her characters. She collects tattoos, cats, and more books than she could ever possibly read.

Email ThisBlogThis!Share to TwitterShare to FacebookShare to Pinterest
Labels: can't wait to read, Contemporary, diverse books, HarperCollins, harperteen, lgbt, rebecca barrow, this is what it feels like, you don't know me but i know you, Young Adult