Blog Tour + GIVEAWAY~Why Aren't You Sweet Like Me? by Carrie Nyman

Welcome to the first stop on the
WHY AREN'T YOU SWEET LIKE ME? BLOG TOUR
by Carrie Nyman
Hosted by moi...

A young couple, Camille “Honey” Shaughnessy and Don Shepard fall in love on the eve of World War II. As America enters the war, and Don is pressured into the service by his father, the two newlyweds struggle to maintain contact. Don becomes a hero, saving the lives of his comrades, but will he make it home alive? Why Aren’t You Sweet Like Me? is a novel based on the actual love letters exchanged between the author’s grandparents.

It is available in print and eBook formats. Please see carrienyman.com for more information. 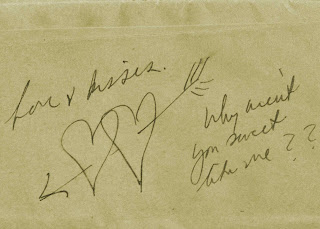 Where are you from originally?
I grew up in Colorado Springs and I moved back here after college at CU-Boulder. My entire life seems to have been stretched along this 90 mile highway.

What inspired you to become a writer and who are some writers that influence you?
I was always a creative child and writing was my main outlet. When I was young and kept home from school, I was inspired by books and plays that were turned into movies, comparing them, correcting what I would have done differently. When I read, it’s almost an escapist venture because my imagination runs away with me. I love C.S. Lewis, Toni Morrison, Neruda, Frost. I read constantly in my free time.

What genres appeal to you the most?
I think that YA actually attracts me the most. Maybe it’s because I kind of missed out on that point in my life but I feel for teens. I understand them.

Tell us about your new book Why Aren’t You Sweet Like Me? How’d you come up with the title, and what inspired the story?
My grandfather was a prolific writer. I have over 130 of his letters and telegrams from before and during WWII. In the days before instant gratification communication, letters took several days to reach their destination; a reply would take over a week. The first letter that I have from my grandfather to my grandmother has two hearts with an arrow going through them. He wrote next to it: “Why aren’t you sweet like me?” Honey had accused him of cheating on her and he retorted with a letter that is both loving and caustic. It’s incredibly telling of his character. My novel is based on the true events detailed in these letters. I documented them and then interviewed people to build Honey’s perspective. I then completed further historical research to ensure that the story was accurate.

How much time went into completing the book, in terms of doing research and actually coming up with the plot?
Plot-wise there is very little creativity; that was already written for me (with a few minor meanderings). I documented letters for five months (starting in April of 2009), interviewed for a week, and wrote for a year. With a professional writer and editor, Mark Graham, I edited for four months. Because the completion of my manuscript coincided with the end of the year, I felt that it would be best to wait a few weeks to query agents and publishers in January 2011. The Sunbury Press asked for my manuscript on Valentine’s Day, and I had a book contract on August 1st.

What do you want readers to take from this story?
“Love is the big thing.” There can be no true happiness and no true wealth without it. If the world were to end, money and a great job and a dream house would mean nothing. Love is the thing that binds us together and makes life worthwhile.

You were diagnosed with degenerative Rheumatoid Arthritis at 14. How has writing helped you cope with that throughout the years?
As with any teenager, one needs to have an outlet in order to be whole; writing was mine. Strangely, I owe my abilities to this affliction.

Are you working on any new projects?
I have almost completed the first draft of my second work, EMPIRE. It’s YA Fantasy fiction with some Christian themes (but isn’t what I’d call “preachy.”)

If you were lost in a world filled with books but was only allowed to take three, aside from your own, which three books would you select and why?
Maclean’s “A River Runs Through It,” Hemingway’s “A Farewell to Arms,” and Austen’s “Pride and Prejudice” (I could read them over and over again and still find something new to appreciate).

What do you do for fun when you’re not writing?
Well, I do consider writing to be fun, but I work out, play with my kids. I do enjoying watching “Game of Thrones” and “True Blood” as well.

Thank you Carrie, any message for your followers or tips for aspiring writers?
When people tell you that you can’t, you must. And when you do, thank your doubters for pushing you to succeed.