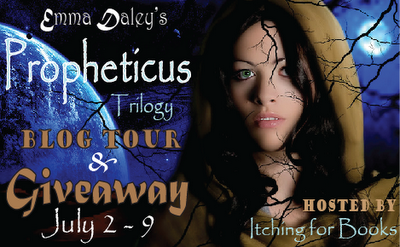 Thank you so much to the following bloggers who participated on the Emma Daley's PROPHETICUS blog tour.

~About the series~
There is something frightening about the way a hateful, unknown creature looks back at you. The way its beady red eyes snarl at you, and it's cheek curls with a hiss to reveal the greedy canines beneath. It is one thing to dream of this beastly creature, and it is another to have it inches from your face, its warm ungodly breath on your cheek, and its pallid gray bones reaching to devour you. My name is Aniah, and once my world was safe. But like many others throughout the universe-and here on the planet Delucia-fate would have me meet with the Mangitori de Sangue; an ancient army of blood-lusting creatures who have been frightening and devouring the inhabitants of the universe for decades. My fate brings me deep into their world. In fact, it is written somewhere-and the stories have been told long before I was ever born-of a prophecy wherein a young woman with the heart and soul of an angel will lead the universe in a victory against the Mangitori de Sangue. I am that woman. I just have to stay alive long enough to figure out how.

Emma Daley was eccentric; this was something her mother knew right from the start. At only the age of three, you could find her perched in the center of the dining table, a tape player in her lap, while the other kids gathered to listen to her recite her own creative version of her favorite tales like “Jack and The Bean Stalk” or “Peter Pan”.


As she grew up, she moved on to bigger and better things. With her older sister, Emma started dressing up the neighbor kids and auditioning for parts in Beauty and the beast, and Cinderella using mops and her mother’s make up for costumes.


Her imagination was fueled when she signed up for a high school Greek Mythology class. It was there in high school Mythology class that Emma found her dream. Her teacher recognized her talent, and encouraged her to pursue a career in the one thing that brought her imagination to life, writing. As a military wife and with life’s fast pace and strenuous demands, it wasn’t until she was 26 that she finally decided to pursue those long forgotten dreams.
propheticusthebook