This is a weekly meme hosted by The Unread Reader. My choice this week is:

Marcus Marble of the Pretty in Black series.

Marcus is a selfless evermore willing to sacrifice his own existence for the girl he loves. His dark and mysterious aura mesmerizes readers, and sometimes it steals your attention from any other character in the book. Marcus' presence is one you just cannot resist acknowledging. He's just that hot.
In my opinion, Diego Boneta would make a great Macus Marble if this book should ever become a movie. 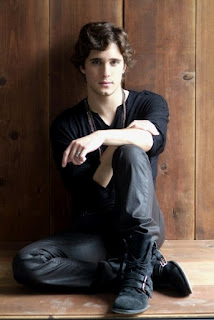 Diego Boneta is a Mexican singer and actor. He is best known for playing Rocco in the Mexican soap opera Rebelde and recurring character Javier Luna in the series 90210. He also appeared as Alex Santiago in the ABC Family series of Pretty Little Liars and has landed the role of Drew Boley in Adam Shankman's much anticipated big screen production of Rock of Ages.

www.diegoboneta.com
Who's your book boyfriend this week?
Posted by Shane @ItchingforBooks at 3:54 PM