Welcome to the IFB stop on the Frankie Rose Sovereign Hope Blog Tour. On my stop I did an interview with the awesome author, as well as a review on her exciting new novel. Check out the interview below:

1. Tell us about yourself. When did you realize you wanted to be a writer?

My name is Frankie Rose and I'm originally from the UK. I've spent a long time traveling around; I lived in Canada for a while, where i spent most of my time skiing. I did the whole Europe thing, and I've recently settled in Australia. Since my husband is Australian, I'll probably be staying here for a while! I started writing poetry back in my early teens, and my love of writing developed from there. I think i was probably about eighteen when I decided I was going to dedicate my time to writing books. Sovereign Hope is my first full length novel, the first book in The Hope Series.

2. What inspired Sovereign Hope and the Hope series?

I've been asked that question a lot recently, and I find it really hard to answer to be honest. I wanted to make Sovereign Hope totally individual, so I tried to create it from scratch, which was pretty difficult. I think I took more inspiration for the atmosphere of the book and the way I chose to write more than for anything relating to the storyline. My favourite writers have coloured my canvas, as it does with almost all authors; I also take a lot of inspiration from artwork, and the amazing ceramicist and painter, Mitsuo Shoji, really gave me a boost here and there. I love his Moon series of paintings. They're incredibly dark and ethereal, and utterly beautiful.

3. How long did it take you to finish the first book?

It took me nine months to write Sovereign Hope. Should have been a lot less, but I was working full time and I hadn't perfected the art of plotting out my chapters, so I got a little side tracked. Eternal Hope took a lot less time. The first rough draft was ready in about six weeks!

4. The characters have so much depth to them. I felt like I could picture them so clearly in my head. How challenging was it to develop characters like Farley and Daniel that could captivate readers and allow us to fall in love with their personalities, because everybody seems to love them?

It was really easy for me to be honest, and I think that was because I spent ages thinking about who they were and what made them tick before I ever started writing. I wanted to know who my characters were inside out before I got going with the book. It's no good if an author is getting to know the people he or she's writing about as she goes along. I've found that characters don't develop well that way. I have been surprised by how much people have loved Farley and Daniel. It's been really rewarding that they've connected with them and want to follow the story through to the following books.

5. The first book is awesome but what can readers expect from its sequels Eternal Hope and Lost Hope?

Well! I can't give too much away, really, but a lot happens over the coming books. In Eternal Hope, we get to spend a lot more time with Daniel and Farley as their relationship develops and they grow closer. There are a lot of new characters, as well as characters we already know from Sovereign Hope. I've had a huge response about Kayden, and people will be pleased to know that he has a huge part in the second book. Now that the initial threat of the Reavers in Sovereign Hope is over, Farley and Daniel are faced with more danger from the Immortals, though not from sources they would ever of imagined.

In Lost Hope, the third book, events from Eternal Hope are having a major effect on all of the characters. Farley is dealing with a few major revelations as well as a life changing promise. The group have to figure out a way to save two of their friends from seemingly invincible forces, and all the while they are dealing with entirely new surroundings yet again, not only in a new city, but in a new country.

I have decided that there will actually be a fourth book to the series, Last Hope, which will hopefully be scheduled to come out some time in the new year. 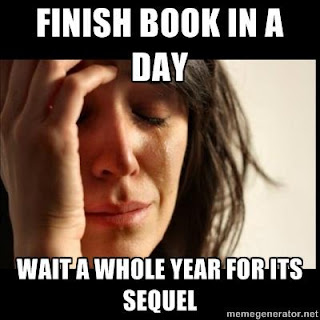 6. And we definitely don't have to wait more than a year in between books to find out how the story ends. Why did you decide to release all three books in the same year?

I think this picture says it all, really. Don't you hate having to wait a whole year for the next instalment of a book? I know I sure do. In most circumstances, I think authors want to release their work quickly, but it's their publishers that want to hold off until the most 'convenient' time. I see no reason not to share my books with readers as soon as they're ready, and I am in a position to do that because I set my own deadlines.

7. What was the absolute best part about writing the Hope series?

Hmm... I think the best part would have to be getting to share the series with people. I've loved working on these books, and the lovely response I've had has been so great. I wrote the books to entertain myself, but also to entertain others, too. It's the best job in the world, and that people like what I do makes it even better.

8. I read that you relocated from the UK to Australia. How has the transition influenced your writing?

I don't think it has! ha ha... I lived in Canada for a while in between living in Australia and England, and I think that transition kind of mellowed out my 'English-ness'. Australia hasn't been that much of a shock to my system. I love living here but I think my experiences in the states, Canada and the UK have coloured my writing palette the most.

9. Do you have any other other projects in the works?

I'm currently working on a few things. I need to buckle down and focus on one thing, I think. I'm just having so much fun with each of my projects. I'm polishing Eternal Hope so that it shines and I'm plotting out Lost Hope. Other than The Hope Series, I'm working on a dystopian New Adult novel about knife fighters, which I'm really excited about. I'm experimenting a lot with this one, with the way I'm writing and with the characters. Some of them aren't entirely likeable, which has been really refreshing for me. This book isn't solely focused on romance- there's a lot going on with the internal battles the characters face as they fight their inner demons and the traumatic experiences from their pasts. I haven't come up with a title for this book yet. It's eluding me, but I know it's going to hit me soon.

The other story I've been working on is a book called Stone. Set in Alaska, the story follows a young girl, fittingly named Stone, who is one of the only survivors of a catastrophic global event. There are small communities of survivors dotted around, and the only thing they all have in common is the fact that they can't dream. As the summer ends and winter closes in, Stone finds herself trapped with a group of people following an injury that prevents her from traveling home. A series of events are set in motion by Stone's arrival in Honour Bridge, and when people are disturbed for the very first time by disturbing dreams, they begin to wonder whether this has anything to do with the strange, wild girl.

10. What do you do when you're not indulging in writing?

I spend a lot of time reading- I know, not very exciting, but an author that isn't addicted to reading...well, I don't think I've ever heard of one of those. I am an obsessive photographer, and I love to be outdoors. I spend a lot of time bush walking and hiking. Australia's really beautiful and there are so many unspoilt areas to explore. Not to mention the beach! It goes without saying that hitting the beach here is pretty awesome. In the winter, I love skiing and snowboarding.

11. Thank you for taking the time. Please leave a message for aspiring writers, including myself.

I guess when I started writing, I set myself this mantra- the four Ps

Patience was first. I was horribly impatient, so I forced myself to dig deep and develop some. Being patient changes everything. When you're not rushing things, your writing is a higher quality and makes more sense!

Productivity. I could go days sometimes just re-reading what I'd already written and thinking about how I was going to  proceed. Mostly this was because I was stuck with a mild case of writer's block, but I figured out pretty quickly that if I just sat down and wrote a sentence, a single sentence, then I would be able to find my rhythm and get writing. I've found that if I didn't focus and continually write consistently with a story, I would lose the passion for it. So being productive, keeping your goals in mind and sticking to them, helps massively.

Positivity. I am nowhere near as positive as I should be, but you really have to be positive in this industry. You get what you give out, and if you're negative about your accomplishments or what you think you can hope to achieve, you will only get negativity back!

Persistence. This one is HUGE! I had plenty of opportunities to just give up and say, 'This is far too hard. I'm never going to be successful here.' But you can't afford to do that. I read this blog one time, and it was brilliant. I wish I could remember who wrote it now. If anyone knows who it was then please email me and let me know! The writer was talking about how the majority of authors, even the most amazing ones, often find themselves doing other work because they've self-terminated their own dreams. Things got tough and they gave up. Agents reject your work, people criticise something that you spent months and months perfecting, someone 'doesn't get' what you're trying to do. These are all soul-crushing things that could make even the most stoic person say enough is enough, especially when it's continual. The important thing is to be persistent. If you have a dream, and you have faith that you're going to achieve that dream, there should be nothing stopping you from realising it. Keep pushing!!