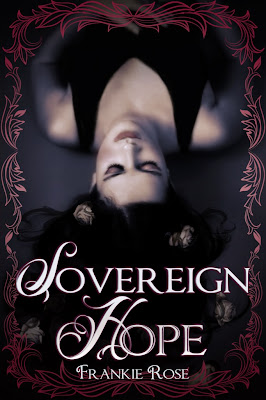 Everyone has a soul.


Some are just worth more than others.


Farley Hope was seventeen when her mother disappeared. In the last six months not much has changed, except that her eighteenth birthday came and went and still no sign of Moira. Her life is just as complicated as it always was. Since her father died in a car crash before she was even born, she’s officially parentless, and to top it all off she’s still suffering from the hallucinations. Mind-splitting, vivid hallucinations- the kind prone to induce night terrors and leave you whimpering under your covers like a baby.


The last thing on her mind is boys. Farley is on break from St. Judes’ when she meets Daniel. It’s not some casual run in at a party, or even a blind date with friends, though. Daniel is the guy following her in his 1970′s Dodge Charger; the guy standing at her window in the LA lunch hour traffic, trying to persuade her to leave everything behind and follow him. And he's hot as all hell.


The moment Farley lays eyes on Daniel, everything changes. He is cold and withdrawn, but there are cracks in his harsh veneer- cracks that betray the secrets he is trying so hard to hide. Farley is drawn into a world that will shake apart everything she thought she ever knew. There are truths out there that she must learn: that a person’s soul is their only real currency, and there are people who would do anything to take hers; that loving someone can hurt so much more than hating them; but, most importantly, when your future is predestined, there is little you can do to change it.

Her coming has been awaited for hundreds of years. She is destined to end the tyranny of the Soul Reavers. To do so she must die.

Sovereign Hope was just ravishing. I was completely electrified by the authentic story-line and tasteful romance. The writing style, the character build up, and the overall setting was just pure genius. What a wonderful debut novel and brilliant start in an exciting new series.

Farley Hope is a young girl trying to make sense of her life and solve the mysterious disappearance of her mother. She's a survivor; that's the only word that kept coming back to me throughout the story. Her strength is commendable, and her determination is just baffling. Farley never gives up on anything. She wants answers and she'll never stop until she finds them. I also liked how the story opened with her and immediately depicting her stubbornness. I didn't take anytime liking her character and if anything, I can relate with her frustration. Here she was being chased by strange men and had no clue as to why. Soon after she learns that her abilities are in fact not as weird as she thought them to be, and her purpose is uncovered.

Daniel, he had me cracking up. He's so blunt and uncaring with his words. Not necessarily the gentleman at start but you can't help but fall for him along with Farley as the story progresses. Their relationship is believable and not as instant as some couples in YA. I liked how their emotions grew as I read.
The other characters had some depth as well. Tess for one, Farley's bestie, sort of calms my nerves. I love how easy-going she was and I'm very pleased with her presence.

It's great when an author creates a world that doesn't exist because that allows the reader to tap into their imagination. But it's also great when a place that actually exists is used as the setting. California is one of my favorite places so that discovery had me giggling like a lunatic. Regardless, I felt the description was incredible and I certainly pictured what was taking place.

The story in general, again, I can't stress enough on how exciting it was. The action scenes had my adrenaline going, and I never felt bored in between. And what an ending. Sovereign Hope was just unbelievable. Don't you want to experience the rush? Get yourselves a copy today!
I've been reading a lot of five star books lately. I hope this trend continues and keep me happy.

Posted by Shane @ItchingforBooks at 11:38 AM