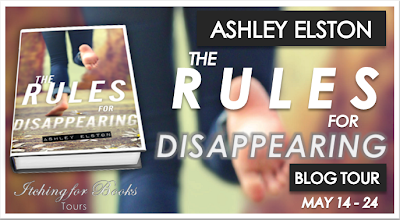 I'll be hosting the Ashley Elston Rules for Disappearing Blog Tour, from May 14th - 24th. See details below:

Synopsis via Goodreads:
She’s been six different people in six different places: Madeline in Ohio, Isabelle in Missouri, Olivia in Kentucky . . . But now that she’s been transplanted to rural Louisiana, she has decided that this fake identity will be her last.


Witness Protection has taken nearly everything from her. But for now, they’ve given her a new name, Megan Rose Jones, and a horrible hair color. For the past eight months, Meg has begged her father to answer one question: What on earth did he do – or see – that landed them in this god-awful mess? Meg has just about had it with all the Suits’ rules — and her dad’s silence. If he won’t help, it’s time she got some answers for herself.


But Meg isn’t counting on Ethan Landry, an adorable Louisiana farm boy who’s too smart for his own good. He knows Meg is hiding something big. And it just might get both of them killed. As they embark on a perilous journey to free her family once and for all, Meg discovers that there’s only one rule that really matters — survival.

Ashley Elston lives is North Louisiana with her husband, three sons and two cats. She worked as a wedding and portrait photographer for ten years until she decided to pursue writing full time. Ashley is also a licensed Landscape Horticulturist and helps her husband run a commercial lawn and landscaping business. They also custom harvest pecans and have cows. Yes, cows.

*No stops on Saturday & Sunday