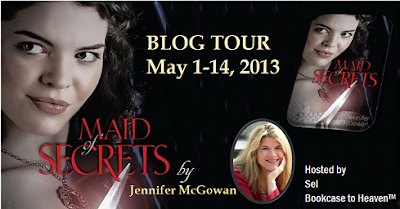 Welcome to the IFB stop on the Jennifer McGowan Maid of Secrets blog tour, hosted by Sel @ Bookcase to Heaven. Check out Jennifer's post below:


Seventeen-year-old Meg Fellowes is a wry, resourceful thief forced to join an elite group of female spies in Queen Elizabeth’s Court. There she must solve a murder, save the Crown, and resist the one thing that will become her greatest freedom–and her deadliest peril.
For Meg and her fellow spies are not alone in their pursuit of the murderer who stalks Windsor Castle.


A young, mysterious Spanish courtier, Count Rafe de Martine, appears at every turn in the dark and scandal-filled corridors of the Queen’s summer palace. And though secrets and danger are Meg’s stock-in-trade, she’s never bargained on falling in love…

Well met, Shane! And thank you for granting me time to speak with your readers today.

As you know my name is Meg Fellowes. Ordinarily, I would try to be a bit more circumspect about my employer… but since you’re not likely to come after me in the halls of Windsor Castle ;), I can tell you plain that I am a spy for the Queen.

Since spying is much on my mind, in fact, I’d like to talk to you about all of the things it takes to succeed in my line of work. As it happens, these skills can also be applied to surviving as a lady in the court, or as a thief, a pickpocket or a street performer in Elizabethan England. In fact, you may them helpful as you undertake your own harrowing adventures in high school, college, and even in your work.  So without further ado, here are my top five tricks to being a successful spy!

1. You need to know yourself

When working for the Queen, it’s easy to get in over your head. To think you can do anything, anytime. But it’s important to know who you really are: your skills, yes—but also your limitations. Your weaknesses. When you’re most likely to make a mistake because you’re tired, angry, or distracted. If you don’t know yourself, then it doesn’t so much matter what you learn… eventually you’ll forget who you are, and you’ll get clumsy, forgetful, or distracted.

And a clumsy, forgetful, or distracted spy quite often becomes a dead one.  Which is not what you want.

2. You need to be quick on your feet.

I could have been better at this myself, I’ll tell you plain. But to succeed as a spy or a thief, you’d do well to be nimble. The Queen’s guard can’t force you to do anything you don’t want to, if you’re quick enough to get away. Go ahead and volunteer for those slightly harder jobs you know will take you away from the horde of hangers-on. That way, when the sillier jobs are being handed out; at least you know you’ll be spending your time wisely.  Just always be on the move.

3. You need to listen more than you speak.

This one is difficult for me, as my mouth can sometimes move far more quickly than my brain. But to excel in the Queen’s court, you have to become a good listener. This is generally easy, as people do enjoy talking. And you can learn a great deal about people who’ve fallen in love with the sound of their own voice.

4. You have to know when to go after what you want (and not let it come to you).

Spying is dangerous work… one wrong move and you might be discovered, one false step and you might be, well, killed. But it’s equally dangerous sometimes NOT to act. You have to be courageous enough to take the calculated risk vs. just standing in place, because otherwise, you’ll never learn anything of value. Yes, it’s true… some of the decisions I make are perhaps not wholly thought out. But instead of waiting for all of the facts, I content myself with having most of the facts, and then taking action. You’ll never know what you might find out when you do!

5. You must keep your enemies close… and your secrets closer.

Spies can learn a lot of things about people. The smart ones also know that a secret held can be much more valuable than a secret shared. Become known for your ability to keep a secret, and you’ll often find yourself privy to more confidences than you would ever have expected!

And those are the tips that have kept me alive and on top of my game amidst the danger, intrigue and deception of the Queen’s court. What tips would you give to a potential spy?

Thank you again, Shane, for having me! If any of your readers would like to find out which of the Queen’s spies is their perfect sister spy, they can take this quiz on Jenn McGowan’s FB page!

Jennifer McGowan has been writing fiction for long enough to know better. Her first attempt at a full-length Choose Your Own Adventure computer program – written when she was 12 years old – was keyed into her brand new Commodore Vic 20. (yes, this means she’s really old. That was back when computers had tape cassettes.) It was called “The Silver Key,” and was the story of a young, intrepid adventurer who discovers pirates, underground labyrinths, and mysterious villains; and who then—against all odds—falls in love.
www.jennifermcgowan.com | twitter.com/Jenn_McGowan