Welcome to my stop on the Amy Joy Lutchen Renhala blog tour, hosted by Giselle @ Xpresso Book Tours. Check out an excerpt from the book below: 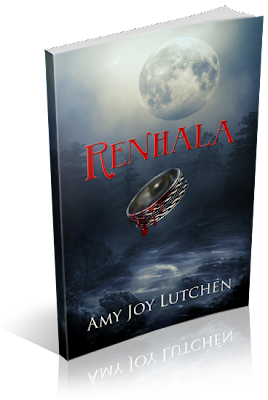 Kailey Rooke, timid accountant, dedicated to philanthropic work, finds herself spiraling into a deep depression after she suffers a horrifyingly odd and humiliating assault, to only discover more of these freakish assaults occurring across the globe.
A chance discovery leads Kailey to a meeting with elderly Gunthreon, actual master of persuasion. Gunthreon, who seems to know too much of Kailey's history for her liking, opens Kailey's eyes to a coexisting realm she never knew existed: Renhala, while entrusting her with the knowledge of her newfound power as karmelean, serving as a beacon to the Higher Ones. Kailey slowly starts revealing new talents, and Gunthreon is fascinated with what she starts achieving.
She soon discovers that Renhala is in danger, and this danger has been leaking into her own realm. As she uncovers secrets within herself, and attempts to toughen up, she fuses with an unlikely band of fellow travelers (including a dragon, woodsprite, six-hundred-pound greble, her faithful female canine companion, and a "giver"), falls into an unexpected love triangle, deals with her sexy and flirtatious best friend’s “issues,” and finds the courage to master a new deadly weapon.
On her mission to save Renhala, Kailey will find herself running from life-threatening disasters, such as greble Tartarin, who likes to remind Kailey that when he catches her, he plans on eating her brains with ice cream; she'll run from the deadly meeples: small cute bunnies with talons and an undeniable thirst for imposing self-destruction on others. Kailey will also run into the possibility that a centuries-old Renhalan rumor is true, that advanced technology existing in Kailey's realm shortens all life spans.
As blood is shed and puzzles near completion, Kailey pulls from deep within herself, conjuring up mystical qualities that enable her to astonish as once predicted at her birth, but despite the newfound strength, Kailey will discover that monsters not only come in ugly packages, but can be easily disguised as those she has come to love and trust.


Six o’clock means she’ll be here at seven, and that gives me plenty of time to get ready. I can hardly believe I’m the one who initiated a night out, but I’m riding the minute possibility that a few really strong, dirty martinis will crumble a few emotional walls of mine tonight. I’m willing to give it a try, but damn well know the probable outcome: me sitting, totally sober, while already-drunk Amber downs the countless drinks bought for her from overly-anxious meatheads.
I switch on the radio and get dressed while lightly shuffling to “Good Vibrations,” by Marky Mark. As I check myself out in the bathroom mirror, I stare, unhappy with the somewhat low-cut shirt I chose—too revealing. While taking the shirt off, I bend over to plug the iron back in, and then the power suddenly goes out, engulfing me in total darkness.
I freeze for a brief two seconds. Then whirl about, using my hands as eyes in the darkness, searching for any weapons in my bathroom. Realizing that two previous nights ago I walked away with a pocket knife usually stored in the medicine cabinet, I grab my cuticle scissors in one hand and my hairspray in the other. Kioto had only been moaning in her sleep that night I moved the knife, but it sounded so alien. Alien. Alien-like grunting.
The guttural sound of grunting from my assaulter’s throat echoes through my mind as I stand motionless, frozen from fear, remembering the noise as he tore off my cotton panties the day of the assault. I lay there, on my stomach, on top of my newly made bed, staring at Bear—a feeling of despair so great and overpowering pulsing through me. I also remember, too painfully, the blood-curdling scream that escaped my throat as I pleaded to anyone listening, a higher being even, to please save me. Don’t let this happen to me. This shouldn’t be happening to me. I wouldn’t survive feeling that hopeless again.
After my eyes adjust, and as I wait for the sound of footsteps or breathing, I hear neither, so I peek around the door and see Kioto lying on the ground, head turned toward me—possibly perturbed by the roaring sounds emanating from my chest. I walk, shakily, with weapons still in hand, toward the window and I see the whole block is out. A quick check toward the sky reveals the approaching storm. I collapse on my couch and cry like a baby, doubting my ability to function like a normal human being ever again. Kioto walks toward me, and slowly licks my blackened tears from my face. “Thanks, baby,” I say as I snuggle into her and regain my normal breathing.
I wipe my running mascara from my face and gather my composure. A glance at the clock tells me that Amber should be here soon. Sooner than I can fix my makeup, the power goes back on, giving me another heart attack when “Kung Fu Fighting” starts blaring throughout the apartment. What a wonderful start to the evening.
Amber arrives at and lets herself in with the key I gave her last week, which was supposed to be for emergencies only. She is absolutely stunning. Her long, straight blond hair complements the lime-green baby-doll dress and her black stilettos. She’s only five foot three, so the extra four and a half inches brings her closer to eye level, but not for long. I decide to wear my knee length, heeled, black boots with my new taupe silk tank top and black pants. I grab my father’s ring off my dresser and slip it into my pocket.
She stares at me and says, “Girl, I need some of that leg length. If you die, can you donate your legs to me?” I laugh and tell her only if she shares some of the endowment on her chest. She’s about a thirty-two E, compared to my thirty-four B.
“You sure you’re ready to do this?” She emanates sincerity.
I shake my head no as the tears fill my eyes and I grab my purse.

Born in Chicago, Illinois, a few days prior to watching her first movie, at a drive-in theater. Yes, drive-in theater. And yes, her mother believed she was possessed by the devil after said first movie.
Grew up in the Chicagoland area and graduated from the University of Illinois, Champaign-Urbana, where she simply became a number, but decided it was a good number.
Loves cooking (mostly candy-cooking), gardening (putting holes in the ground for perennials, DONE!), designing and constructing jewelry (everything from silversmithing to lampworking), and living with her wonderful husband, two children, black Labrador, and frog—and maybe even the chipmunk family that likes to destroy her aforementioned perennials.
Also hopes that you enjoy her writings, and won’t criticize her for her aversion of eating things in multiples of three.