Welcome to my stop on the Requiem for Blood blog tour, hosted by the awesome Giselle @ Xpresso Book Tours. Check out my review below: 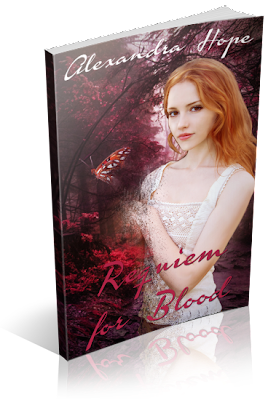 Seventeen year old Olivia Cohen has always had an appetite for blood and an aversion to the sun as a human and when she is killed by a mysterious young woman, she finds her appetite has heightened and her skin is now burned by the sun. Living her life in a colony with other people who live a "vampire-like" lifestyle, she has grown up hunting humans and believing there is a blood so powerful it will turn them from vampire-like into true vampires. On one of Olivia's final nights as a human she meets eighteen year old Troy Evans and is immediately drawn to the unique scent of his blood. Now as an actual vampire, she must learn how to suppress her need to hunt and kill for his sake and decide if his unique blood is worth saving from those who seek it.

This book is without a doubt not for the modest, but far from grotesque. I would say if you can tolerate the graphic rudiments that pop out in the author's descriptive style of writing then you'll make it to the end.

Requiem for Blood was an interesting read. I liked how different the story was from the usual vampires, and the fact that it didn't start out with "real" vampires to begin with but rather, lunatics in love with the idea of being creatures of the night until it happens for real.

At first, I was a bit confused with what was taking place and I couldn't relate well with the main character but as the story progressed I opened up to her. Olivia's basically a good girl following the teachings of her mother without ever questioning her beliefs. She placed her mother on the highest pedestal ever until the truth began to unravel. Suddenly, Olivia comes to the realization that everything she once believed in was all part of her mother's crazy plans for her. Anyways, that intriguing aspect aside, meaning the mystery surrounding the colony or in my opinion, psychotic cult,  it wasn't a bad read.

The writing was believable; the world building was different. I wasn't bored at all, just at times confused by some details as I read along. Also, there were characters I had a bit of trouble with: Troy and Alexa, along with a few others. To me, they seemed a bit off at some point, and for some reason I couldn't quite soak them in.

Once again, it was an interesting story. There was a sense of uniqueness that pulled me in and I couldn't help but continue on. The scenes came to life in my head, the little element of humor was a nice addition here and there as well, and it was intriguing to read about a character who lived a life as a "pretend" vampire and then transforms into a real one. That was the most interesting aspect of the story to me.

About the Author
Alexandra Hope (a pen name)  was born in New York, raised for the most part in Atlanta, GA and lives somewhere in the German state of Bavaria. Her earliest days of writing were on the back of her tests before she discovered that she could write on her own paper and keep it at home. Lot of good that did her though, she still wrote in school to pass the time and got her writings thrown in the trash by the teacher for all her work. Soon after, she discovered the internet and the world of K-pop fanfiction and is an unabashed fanfic writer, though she hasn’t dabbled in it for a while. She’s also a professional TV watcher and a vocalist in a Japanese band. Seriously.

a Rafflecopter giveaway
Posted by Shane @ItchingforBooks at 1:00 AM