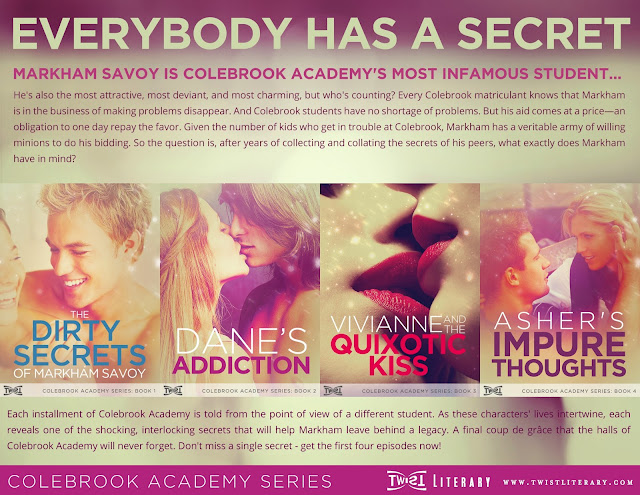 Thanks to Twist Literary I've been granted the pleasure to host the cover reveals of all four books in the Colebrook Academy Series. Check them out below and be sure to enter the international giveaway:

The Dirty Secrets of Markham Savoy

Synopsis via Goodreads:
Even though he safeguards the secrets of his classmates, Markham wouldn't be caught dead sharing his own, and he never lets romantic entanglements get the best of him. But when Piper Harrington marches into his life, he’s forced to give her something in exchange for her cooperation in his schemes--his very own Colebrook Confession. And that's not the only time Piper brings out an unexpected side of himself.
Will the dirty secrets of Markham Savoy be his crowning glory...or his undoing?

Synopsis via Goodreads:
After a stint in rehab, Dane’s back for his senior year. But just because he gave up drugs doesn’t mean his unsavory friends from last year are willing to let him walk away scot-free. Dane has unfulfilled obligations that may cost prison time—or his life--to meet. Even the son of a Russian mobster needs Markham’s help when blackmail and coercion are the name of the game. And all Dane wanted when he came back was the chance to rekindle his steamy, secret romance with the girl who’s always toyed with his heart. Will he be able to convince her his love is worth the risk?

Vivianne and the Quixotic Kiss

Synopsis via Goodreads:
Vivianne Benthurst is a good friend—loyal, caring, and protective to a fault. Especially when it comes to her roommate, Audriana. That’s why she’ll do whatever it takes to keep Audriana away from Dane, the campus burnout. Truly, that’s the only reason. It’s not like she’s jealous. Take one look at Vivianne's gorgeous, rowing captain boyfriend and you'll know he has everything necessary to keep her satisfied.
Now Audi is in danger of being ousted from Colebrook, and Vivianne looks to her good friend Markham for help. But when it becomes clear that it is the loathsome Dane who actually holds the key to saving Audriana, will Vivianne be willing to step aside? Or will she be forced to face the real reason she can’t let Dane and Audi be together?

Synopsis:
You name it, Asher Van Der Bos “the boss” has it all. Trust fund? Check. Good looks? Check. Gorgeous girlfriend? Check. Olympic rowing future? Check. Steamy sex life?
Uncheck.  For now.
Senior year, Asher should be all about rowing and hanging out with the team.  After all, he’s Captain.  And Colebrook’s first shot at Olympic glory.  But lately, another extracurricular caught his eye: the abstinence club.  In order to win back his girlfriend, Vivianne, Asher needs to know why she shoots him down at every turn.  So he confesses his impure thoughts to Faith Wilkes, the ultra hot but uptight “abstinence girl.”  And she confesses a few fantasies of her own in exchange.  Soon the abstinence club meetings make Asher think about anything but abstaining and make him wonder if he’d been chasing the wrong girl all along.

See the list below for everyone participating in the reveal & be sure to enter the giveaway: