Guest Post: Jamie Baywood on Getting Rooted in New Zealand

Author Jamie Baywood has stopped by IFB to share the inspiration behind her debut novel. Check it out below: 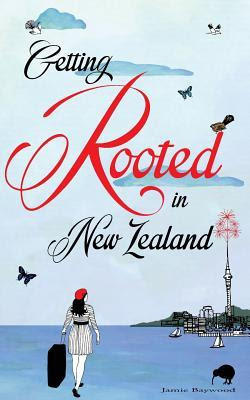 Synopsis via Goodreads:
Craving change and lacking logic, at 26, Jamie, a cute and quirky Californian, impulsively moves to New Zealand to avoid dating after reading that the country's population has 100,000 fewer men. In her journal, she captures a hysterically honest look at herself, her past and her new wonderfully weird world filled with curious characters and slapstick situations in unbelievably bizarre jobs. It takes a zany jaunt to the end of the Earth and a serendipitous meeting with a fellow traveler before Jamie learns what it really means to get rooted.

INSPIRATION BEHIND THE STORY

It was always my dream to live abroad when I was growing up in California. I had bad dating experiences in California and read in a New Zealand tour book that the country’s population at 100,000 fewer men than women. I wanted to have some me time and an adventure. New Zealand seemed like a good place to do so. Although I intended to have a solo adventure I ended up meeting my husband in New Zealand.

I consider myself an accidental author. I didn’t go to New Zealand with the intentions of writing a book about my experiences there. I had funny experiences that I had trouble believing were true. I wrote the stories down to stay sane. I wrote situations down that were happening around me and shared them with friends. The stories made people laugh so I decided to organize the stories into a book and publish in the hopes to make others laugh too.

One of the first people I meet was Colin Mathura-Jeffree from New Zealand’s Next Top Model. I had no idea who he was or that he was on TV when I meet him. He is friends with my former flatmate. We had a steep staircase that I kept falling down. Colin taught me to walk like a model so I wouldn’t fall down the stairs.

In New Zealand, I had a lot of culture shock. One of the most memorable moments was learning the meaning of the Kiwi slang word “rooted.” One night I was brushing my teeth with my flatmate and I said, ‘I’m really excited to live in this house because I have been travelling a lot and I just need to settle down, stop traveling and get rooted’. He was choking on his toothbrush and asked me if I knew what that meant because it had a completely different meaning New Zealand than it does in the States.

I had the opportunity to write and perform for Thomas Sainsbury the most prolific playwright in New Zealand. I performed a monologue about my jobs in the Basement Theatre in Auckland. The funny thing about that experience was Tom kept me separated from the other performers until it was time to perform. I was under the impression that all the performers were foreigners giving their experiences in New Zealand. All of the other performers were professional actors telling stories that weren’t their own. At first I was mortified, but the audience seemed to enjoy my “performance,” laughing their way through my monologue. After the shows we would go out and mingle with the audience. People would ask me how long I had been acting. I would tell them, “I wasn’t acting; I have to go to work tomorrow and sit next to the girl wearing her dead dog’s collar around her neck.”

I love making people laugh more than anything else. I feel very grateful when readers understand my sense of humor. I plan to divide my books by the countries I’ve lived in. My next book will be about attempting to settle in Scotland.

About the Author
Jamie Baywood grew up in Petaluma, California. In 2010, she made the most impulsive decision of her life by moving to New Zealand. Getting Rooted in New Zealand is her first book about her experiences living there. Jamie is now married and living happily ever after in the United Kingdom. She is working on her second book.