Review: No One Needs to Know by Amanda Grace 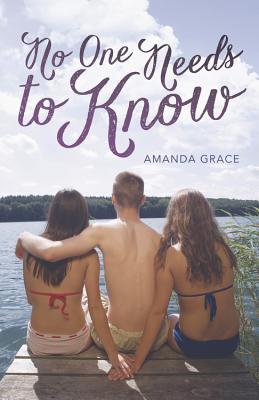 Sometimes, the cost of love is too steep

Olivia's twin brother, Liam, has been her best friend her whole life. But when he starts dating, Olivia is left feeling alone, so she tries to drive away Liam's girlfriends in an effort to get her best friend back.

But she meets her match in Zoey, Liam's latest fling. A call-it-like-she-sees-it kind of girl, Zoey sees right through Olivia's tricks. What starts as verbal sparring between the two changes into something different, however, as they share their deepest insecurities and learn they have a lot in common. Olivia falls for Zoey, believing her brother could never get serious with her. But when Liam confesses that he's in love with Zoey, Olivia has to decide who deserves happiness more: her brother or herself?

Even though No One Needs to Know had its good points, it's so not what I'd expected it to be. The story didn't grab me a lot the way the blurb did and to be honest, at times it got draggy and I sort of drifted away from some scenes, anticipating the end. I didn't get the fireworks so to speak, but overall, it wasn't a bad read because it was my first time getting into a book of such premise and I liked it.

The story is told from the alternating POV of both girls, and I kinda wish that Liam had a narration too because I'd like to get into his head more to truly see how certain things affected him, especially since he and his sister are basically abandoned by their parents until further noticed. I also would have liked to understand just how Olivia's clinging ways bugged him.

Speaking of Olivia, she was a trip at first. Very oblivious to the way people perceived her and not all there with having an idea of who she really was. I liked how when she and Zoey were paired up in class and they dared each other to step out of their comfort zone. It truly was an eye opener for Olivia. I liked how she started to lose the pretentious cloak she used to wear and began to show more of her true side to Zoey. Their relationship certainly blossomed and it was interesting seeing how both reacted to their feelings for the other.

Zoey, on the other hand, went through hell because of Olivia's friend and the fact that she yearned for a better situation for her mom and little sister, as well as for herself. She seemed a tad complacent at first but from the beginning of the book til the end, she was my favorite character because she kept it real with Olivia.

In terms of pacing, like I said there were a few bumps along the road where I zoned out, but aside from that it was a good story with nice writing that kept my interest.