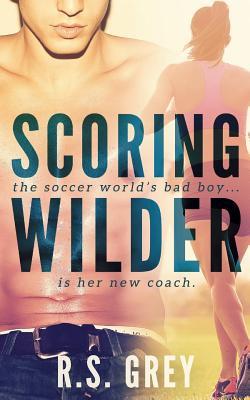 What started out as a joke-- seduce Coach Wilder--soon became a goal she had to score. With Olympic tryouts on the horizon, the last thing nineteen-year-old Kinsley Bryant needs to add to her plate is Liam Wilder. He's a professional soccer player, America's favorite bad-boy, and has all the qualities of a skilled panty-dropper. * A face that makes girls weep - check. * Abs that can shred Parmesan cheese (the expensive kind) - check. * Enough confidence to shift the earth's gravitational pull - double check. Not to mention Liam is strictly off limits. Forbidden. Her coaches have made that perfectly clear. (i.e. "Score with Coach Wilder anywhere other than the field and you'll be cut from the team faster than you can count his tattoos.") But that just makes him all the more enticing...Besides, Kinsley's already counted the visible ones, and she is not one to leave a project unfinished. Kinsley tries to play the game her way as they navigate through forbidden territory, but Liam is determined to teach her a whole new definition for the term "team bonding."

*Purchased the ebook on Amazon.

I enjoyed the story for the most part. The main character is funny, witty, and likeable. I love that the plot surrounded soccer and that Kinsley was so athletic. I haven't read many books with such a character so that was different for me.
From start to finish she held my interest, and I was either laughing or swooning along with her. I liked how focused she was on her goals and how hard she worked to accomplish them. It sucks that she was screwed over by her past boyfriends but I'm glad it didn't impact her in such a way that she wallowed in self-pity and put her life on hold. It did affect her ability to trust though, so I could understand her being afraid of her intense feelings for Liam and constantly questioning his motives for her. Thankfully, it didn't throw a monkey wrench in their relationship and any doubts were quickly dealt with.

Her friends were interesting people as well, Becca in particular. She had a youthful nature and was really fun. Emily was more laidback and quiet (like me), but I wish she was part of the story more and not always described as being caught up with her long distance relationship. It almost seemed like she was left out and that kinda made me feel sad for her. I also didn't connect as much with Liam as I'd like to, and maybe it's because the story is told only from Kinsley's POV. Had it been dual narration, I probably would have loved Liam more.

Another thing is that after a certain part the story went on for too long. I feel like it could have wrapped up sooner than it did and some things that happened towards the end seemed like filler and were too dramatic. I actually rolled my eyes at them, but fortunately I'd enjoyed the story up till that point so it didn't throw me off completely.

Overall, the writing was good--lucid and entertaining. The main character was also well developed. This is my first experience with R.S. and I must say that I'm impressed, motivated enough to want to read her other works. If you're looking for New Adult that's funny and sweaty be sure to pick this one up.

Posted by Shane @ItchingforBooks at 7:04 AM