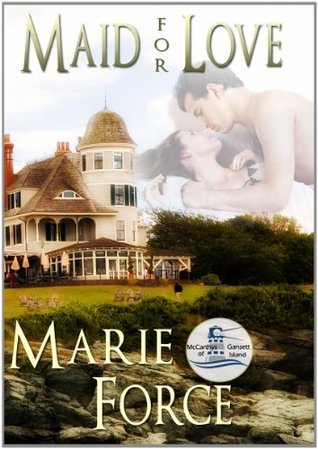 Maddie Chester is determined to leave her hometown of Gansett Island, a place that has brought her only bad memories and ugly rumors. Then she's knocked off her bike on the way to her housekeeping job at McCarthy's Resort Hotel by Gansett's "favorite son," Mac McCarthy. He's back in town to help his father with preparations to sell the family resort and has no intention of staying long. When Mac accidentally sends Maddie flying over the handlebars, badly injuring her, he moves in to nurse her back to health and help care for her young son. He soon realizes his plans for a hit-and-run visit to the island are in serious jeopardy, and he just may be "maid" for love.

It's very rare for me to find an author from my hometown, so you can imagine my excitement when I discovered Marie Force's books on Goodreads. With that said, I enjoyed Maid for Love. The story does have its issues, but for the most part, it was really good.

From jump I connected with the characters. Mac is this adorable (and hot) guy who had no intention on falling in love, but stumbled right into it when he first encountered Maddie. Now, their initial meeting was quite painful, being that they ended up bruised from it, but I liked how the story played out from there.

I mentioned before that the story had a few issues, one being how fast their relationship progressed. I had to push that aspect of it aside and try to pretend that their feelings soared after a few weeks. But it wasn't a major problem and I didn't find it hard to accept how Mac quickly changed his views on love. Not only him, but Maddie's heart had some work to do as well. She was very closed off and as the story went on, you begin to understand why. When you're rumored to be a particular kind of woman in your hometown, chances are you wouldn't be so quick to trust either. I applaud her for her strength to stick around, because had that happened to me, I would have bolted.

The side characters were nice additions as well. I liked Big Mac and loathed the mother when need be. Her personality was brought out greatly in various scenes and I think my reaction to her is what was intended by the author. Oh, can't forget baby Thomas. He was adorable. Whenever the author described him and his behavior it made me smile. Like seriously. I could envision him and everything else that was going on. Great writing and lovely descriptions.

If you're looking for a contemporary romance read to warm up your cold winter nights, then Maid for Love is the book for you. Guaranteed to make you swoon. And I cannot wait to see what happens between Janey and Joe in book two.

Posted by Shane @ItchingforBooks at 1:32 PM