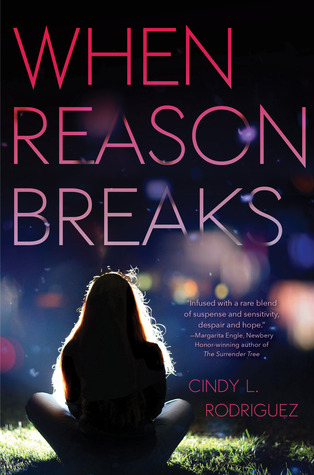 A Goth girl with an attitude problem, Elizabeth Davis must learn to control her anger before it destroys her.

Emily Delgado appears to be a smart, sweet girl with a normal life, but as depression clutches at her, she struggles to feel normal.

Both girls are in Ms. Diaz’s English class, where they connect to the words of Emily Dickinson. Both are hovering on the edge of an emotional precipice. One of them will attempt suicide. And with Dickinson’s poetry as their guide, both girls must conquer their personal demons to ever be happy.

*Approved by publisher on Netgalley

When Reason Breaks was an intense read for me. It had my emotions all over the place and that's one of the main things I liked about the story. It made me think. A lot. For instance, I was so sure about which girl would reach her breaking point and decide to end her life, but I certainly had a wake up when I realized that I was judging based on stereotypes. Sure, that character seemed the most likely to commit suicide, and with the way she dealt with her feelings of anger throughout the book, it seemed fitting. So that was a great twist by the author in order to let people know that you can't just make a decision about someone based on what you see on the outside. Sometimes it's the one that appears to be okay that is the most troubled. With that said, I should talk about the characters.

Emily seemed like the girl with everything, but once you develop an understanding of her family life and see how much pressure she was under to paint a perfect picture on a daily basis, then you could understand her inner suffering and even relate to her. In the beginning, I thought it wasn't as bad in comparison to what Elizabeth was going through. She had a violent outburst after witnessing something hurtful and basically skated down a painful path after that. Her relationship with her mother appeared dead, and it was as if her mother wasn't even trying to change things. She was so quick to scold Elizabeth and hardly ever listened to her daughter, so that along with other things were taking a toll on Elizabeth and I sympathized more with her in the first few chapters because her life just seemed so much more sad. But I was wrong. There's no weighing when it comes to someone's pain. No one feels it more than the other. The ending proved that to me.

Aside from the overall concept and the great way in which Rodriguez delivered such a moving story, I was intrigued by the Emily Dickinson poems she used and very impressed by how well the author intertwined Emily's words to her own. As you read, you can definitely see how each poem attributes to a character. To be honest, I've never delved that much into Dickinson's works but after reading When Reason Breaks, I'm fascinated enough to want to learn more. That's how good this book is.

Back to the writing. Superb is the one word that keeps coming to me when I think of Rodriguez' writing style. It's lucid in the sense that it's easy to read and you'll absorb word after word without ever wanting to stop. I liked her descriptions and how I could see every scene and feel every emotion. I also liked that the story wasn't too fast or too slow. It was just right. There was never a moment that I felt bored or thought that it was dragging. Every detail mattered and every chapter pulled me in deeper. I wanted so badly to find out which one of the characters ended up in the woods after reaching her breaking point, and I wanted to know what would happen to her. If she would survive and if so, how she would face life afterwards. I can't say enough how much I liked When Reason Breaks, and I'm blown away by the fact that this is a debut. It's as if the author has been writing for ages. I highly recommend this one. It's such a good story and I look forward to reading Cindy Rodriguez' next book.

About the Author
Cindy L. Rodriguez is a former newspaper reporter turned public school teacher. She now teaches as a reading specialist at a Connecticut middle school but previously worked for the Hartford Courant and the Boston Globe. She and her young daughter live in Connecticut. When Reason Breaks is her debut novel.