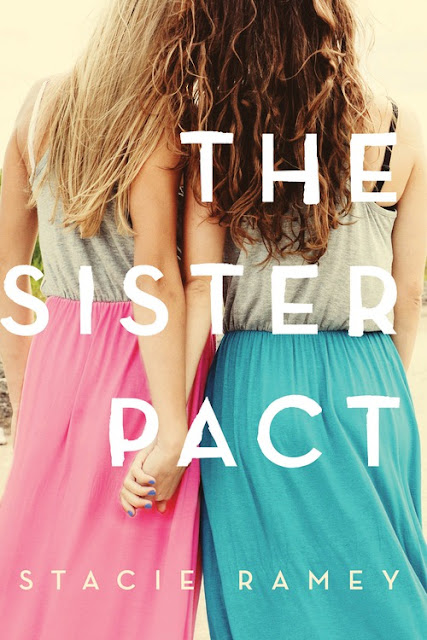 A suicide pact was supposed to keep them together, but a broken promise tore them apart.

Allie is devastated when her older sister commits suicide - and not just because she misses her. Allie feels betrayed. The two made a pact that they'd always be together, in life, and in death, but Leah broke her promise and Allie needs to know why.

Her parents hover. Her friends try to support her. And Nick, sweet Nick, keeps calling and flirting. Their sympathy only intensifies her grief.

But the more she clings to Leah, the more secrets surface. Allie's not sure which is more distressing: discovering the truth behind her sister's death or facing her new reality without her.

I like emotional stories that surround topics authors tend to shy away from, so I was really curious about The Sister Pact after reading the blurb. Initially, I had a tough time getting into the story, but once things started to move along it became more intriguing and more intense.

The book opens up with the aftermath of one sister's suicide. Allie is trying to cope with the fact that Leah has taken her life without telling her beforehand that she was going to do it. Her parents decide to have her see a psychiatrist because they're worried Allie will do the same. At first it seemed like Allie was okay, that she wasn't struggling with depression or even had the intention of committing suicide, but once we start to get inside her head and see how her life was, I realized she had a lot of issues like her older sister, and mostly it had to do with her relationship with Leah and the effects of her parents' failed marriage.

Like the reader, Allie had a lot of questions. She desperately needed to know why Leah took her life and why she broke their pact. Because of this, she even started seeing her older sister and we're given the chance to experience the kind of influence Leah had over Allie. It certainly wasn't healthy. I mean, some of the things Leah said and did had me wondering how Allie could idolize her so much. Leah even led Allie to believe that by doing something in particular, she would make her boyfriend pay more attention to her. That and the fact that she convinced Allie to start a suicide pact was enough to convince me something wasn't right with Leah. She seemed like a manipulator, along with having mental issues. And the only person oblivious to that was Allie, because she was too set on believing her older sister was perfect.

Throughout the story, Allie made some decisions that baffled me and the way she idolized Leah had me shaking my head. Allie clung to her older sister so much that it drove her further down a painful path, and it truly saddened me when her life continued to fall apart. I commend the author on delivering such realistic emotions and issues that others can relate to. Allie isn't a sweet and clean YA character, she dealt with a lot and aside from her dark art, used other methods to try and control her pain. Her character was raw and imperfect, the kind I like.

There were other aspects of the story that were interesting, like their parents' personalities and how the mom was with the father. I felt that if she depicted more strength and had shown her daughters not to stand for certain things, then maybe that would have helped in some ways, especially with Allie. She didn't consider her mom to be a strong person because of how her mom allowed the father to have control over her even when they'd split. Maybe Allie could have been stronger in facing her problems, had that been demonstrated by a mom she could respect in that way. I liked how they were able to resolve some tension in their mother-daughter relationship toward the end, though, and I was happy when the mom finally made a stand for herself.

Nick was a sweet addition and I liked how he treated Allie throughout the story. She was going through a lot so the way she was with him was understandable, and the fact that she was strung up on another guy who wasn't deserving of her feelings made things even more complicated for her and Nick. Thankfully, by the end of the book Allie started to come into her own, learned to handle her pain in a healthier way, and was finally starting to let Leah go.

Overall, a great story with an emotional subject. The writing was wonderful, very fluid. The storyline definitely made an impact on me and had me taking a deeper look at mental illness and how it's often overlooked. I implore you, please reach out to someone for help if you're going through what Allie and her sister were facing in this book. You are not alone. Suicide is never the answer.

Stacie Ramey learned to read at a very early age to escape the endless tormenting from her older siblings. Where the Wild Things Are was her first favorite book and she swore she’d only marry a man who could prove he had rumpus in his heart!
She attended the University of Florida, where she majored in communication sciences, and Penn State where she received a Master of Science degree in Speech Pathology. She also met her future husband at Penn State, who surprised her one day with all of the stuffed Wild Things’ characters, proving his worth. Stacie currently works with high school aged Autistic kids, introducing them to the literary worlds she grew up loving. When she’s not working or writing, she engages in Netflix wars with her children or beats her husband in Scrabble, all while watching the Florida Gators and Penn State Nittany Lions play (Go Gators). She lives in Florida with her husband, children, and rescue dogs.
WEBSITE | FACEBOOK | TWITTER | INSTAGRAM