Review: He Will Be My Ruin by K.A. Tucker 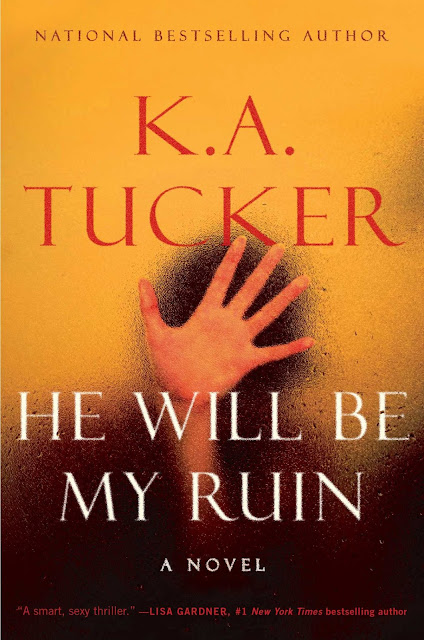 Twenty-eight-year-old Maggie Sparkes arrives in New York City to pack up what's left of her best friend's belongings after a suicide that has left everyone stunned. The police have deemed the evidence conclusive: Celine got into bed, downed a bottle of Xanax and a handle of vodka, and never woke up.

But when Maggie discovers secrets in the childhood lock box hidden in Celine's apartment, she begins asking questions. Questions about the man Celine fell in love with. The man she never told anyone about, not even Maggie. The man who Celine herself claimed would be her ruin.

On the hunt for answers that will force the police to reopen the case, Maggie uncovers more than she bargained for about Celine's private life--and inadvertently puts herself on the radar of a killer who will stop at nothing to keep his crimes undiscovered.

He Will Be My Ruin is by far my favorite suspense novel by  K.A. Tucker. The story sucked me in from start with that chilling prologue, which had me wondering who the hell had Maggie captive and how did she end up in that predicament after her friend supposedly killed herself?

I really thought I had it figured out when Maggie came in contact with one person in particular, and this guy seemed like the perfect fit because of the kind of access he had in Celine's life, but then another came into the picture and my mind started going back and forth between them. I would snap at Maggie when she couldn't see something that was so clear to me, but then I'd retract because once the story progressed and got deeper, I realized that it truly could be anyone close to Celine from the life she was secretly living. And if you're easily turned off by a certain lifestyle in books and the not so sweet or perfect acts carried out by characters, then you might be quick to judge Celine because of what she did to get by. I liked her, in spite of the decisions she made. Celine's the perfect representation of someone having financial difficulties who resort to unfavorable choices when desperate for a better life. Her mother was ill and she relied on her daughter's help. I mean, I got mad at Celine several times for not accepting help from Maggie, but I understood why and I got that she just didn't want her bestfriend's handouts. Perhaps Celine didn't want to seem like that needy person and wanted to earn her own, no matter the methods. Or you could say it was pride. Either way, she was a desperate young woman who fell into a life she shouldn't have and had some emotional issues no one should suffer through.

As for Maggie, she was tough, and I loved that she was so determined to prove that her best friend didn't commit suicide and that someone else was at play. She started her own investigation and got the help of others that over time became just as determined as she was. I liked that Maggie got to see a different side to her friend by reading the diaries. She discovered how Celine really felt about her and the wealth that she came from. And sometimes when you and your friends come from two separate lifestyles, you never really know how one honestly thinks of the other in their hearts. So the diaries were a way for Maggie and the reader to understand Celine more. And even though it was a surprise and a tad too soon that Maggie had such an encounter with one guy, and then hours later she was having another "interesting" experience with another, I didn't let those acts sway me from the story and the mystery of what happened to Celine. And I should mention that it was a great thing that the author gave us some chapters with Celine's POV that coincided with a reveal from Maggie's chapters. It also made some things clearer to me.

Another thing I enjoyed was the addition of art and Celine's love for art history. It was almost like a learning experience whenever something involving her collection came up and I'd feel so enamored and want to know if these pieces truly existed. I liked her friend, Hans, and how much he added to that aspect of the story. I could honestly feel his love for these artsy finds jump out of the pages. He was quite a likable character who added a bit of entertainment in his scenes when the story became too intense for me. Ruby was also a wonderful inclusion and it was nice to have another person on Maggie's team when no one else believed that her friend didn't kill herself.

Okay, I don't want to continue any further in fear of giving too much away, but I can conclude with how much I loved the story and the overall element of suspense. K.A. is a superb writer and as usual, her storytelling is on point. She had me seriously second-guessing myself with this one. When I was convinced I had solved the mystery of Celine, the author totally switched it up on me towards the end and I loved how it played out. Such a awesome story filled with intrigued and a lot of twists. I highly recommend.

About the Author
Born in small-town Ontario, K.A. Tucker published her first book at the age of six with the help of her elementary school librarian and a box of crayons.
She currently resides in a quaint town outside of Toronto with her husband, two beautiful girls, and an exhausting brood of four-legged creatures.

Posted by Shane @ItchingforBooks at 3:00 PM

Email ThisBlogThis!Share to TwitterShare to FacebookShare to Pinterest
Labels: Adult, Atria, he will be my ruin, K.A. Tucker, Mystery, Psychological, Reviews, Suspense