Review: How to Keep Rolling After a Fall by Karole Cozzo 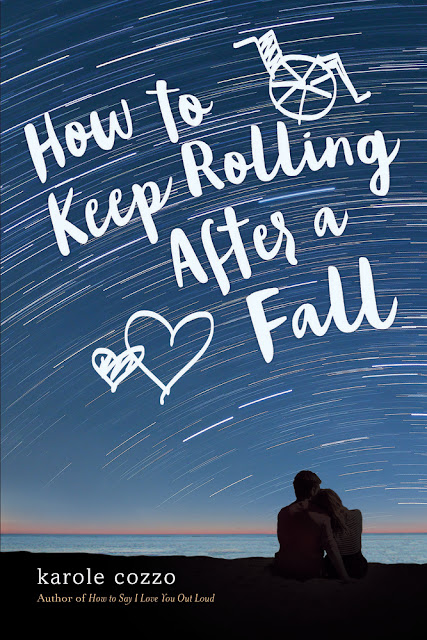 After a cyber bullying incident turns her life upside down, a handsome wheelchair rugby player shows a former mean girl that everyone deserves a second chance.

The party was at her house. The photos were posted to her Facebook account. That's all the evidence anyone needed to condemn Nikki Baylor for a cyberbullying incident that humiliated a classmate and nearly resulted in the girl's suicide. Now Nikki's been expelled from her old school, her friends have abandoned her, and even her own parents can't look her in the eye. With her plans for the future all but destroyed, Nikki resigns herself to being the girl everyone hates - almost as much as she hates herself. But then Nikki meets Pax, a spirited wheelchair rugby player who knows what it's like when one mistake completely shatters your life. Refusing to judge her because of her past, he shows her that everyone deserves a second chance... and everyone deserves to be loved.

This was a nice story. It's not often you get the perspective of the person involved in causing emotional damage for another, so it was great seeing things from Nikki's POV, even if she wasn't the one solely responsible.

The moment the story opened up I knew she wasn't the person everyone thought her to be, including her parents. Nikki basically went down for something that the real culprits didn't take the blame for, and she lost a lot as a result. It was nice of Pax to make her realize the goodness in her and find herself again. And I like that he wasn't this perfect guy, but someone with his own issues that didn't allow them to keep him down. Pax was going through some serious stuff and the fact that he could remain so humorous and supportive to others amidst it all showed the kind of person he was. I loved his character and found him to be the best gift for Nikki in a time where she thought all was hopeless.

About the Author
Karole lives outside of Philadelphia, PA with her loving husband, exuberant little girl, and smiley little boy. She adores YA Romance, because it would be awesome if life in general had a requisite feel-good happy ending rule. Vices include obscene Haribo gummy consumption, addiction to Starbucks NF vanilla lattes, and tendency to hoard Bath and Body Works 3-wick candles.
www.kacozzo.com
twitter.com/KACozzo
instagram.com/karolecozzo

Email ThisBlogThis!Share to TwitterShare to FacebookShare to Pinterest
Labels: Contemporary, Drama, Family, how to keep rolling after a fall, karole cozzo, Reviews, Teen