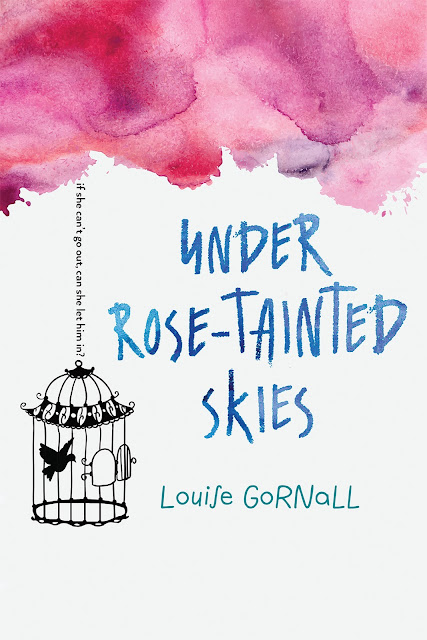 At seventeen, Norah has accepted that the four walls of her house delineate her life. She knows that fearing everything from inland tsunamis to odd numbers is irrational, but her mind insists the world outside is too big, too dangerous. So she stays safe inside, watching others’ lives through her windows and social media feed.

But when Luke arrives on her doorstep, he doesn’t see a girl defined by medical terms and mental health. Instead, he sees a girl who is funny, smart, and brave. And Norah likes what he sees.

Their friendship turns deeper, but Norah knows Luke deserves a normal girl. One who can walk beneath the open sky. One who is unafraid of kissing. One who isn’t so screwed up. Can she let him go for his own good—or can Norah learn to see herself through Luke’s eyes?

After reading the blurb, I became curious and wanted to understand what was going on with Norah. Agoraphobia and OCD should never be brushed off or taken lightly. Norah definitely had a mental issue, and every page depicted the physical and emotional turmoil her illness took on her. I mean, there are times when I don't even want to go to my mailbox or attend a social event, but I don't panic or get on the verge of passing out when I do. And Norah had those just from the thought of leaving her house, or if the probability of danger tugged at her mind. It was quite a story to read, and I loved the writing and how the author was able to deliver awareness and better understanding of something so serious and realistic. Many go through the same thing as Norah and I feel her story can be related to.

There were instances where I would get frustrated with Norah and wanted her to just take that step or try and relax. But then I'd remind myself that this is an illness. This is really happening to the girl. She's not being melodramatic and cannot simply snap out of it. That became even more clear when Luke came into the picture. Like everyone, Norah had the desire of having a relationship, whether a true friendship or dating, and her illness made that hard. Many just didn't understand or laughed at the situation, and I was happy that Luke was genuinely interested in Norah and could accept every part of her as he grew to understand her illness.

For the most part, Norah's condition and how it affected her life kept me intrigued. But I noticed that as the story went on and somewhere in the middle, it started to feel prolonged for me. And I didn't care for the drama that happened toward the end between her and Luke. Even though I had suspected that he'd end up doing that, I still feel like the resulted conflict should've gone a different way. Regardless of losing a little interest, I continued with the hope that something was going to help Norah and give her a good leap at having a speck of normalcy, especially since she acted out her anxiety in other sad and painful ways. And I liked how the author presented that horrible situation in the end for someone dealing with Agoraphobia, and showing us how the mental illness could be paralyzing even when it was life or death. It took a lot for Norah to make that move, but it was great to see her overcome something so tremendously hard.

So overall, Under Rose-Tainted Skies is a good story with great writing and a very realistic issue. Hopefully someone will find it relatable and realize that they're not alone and can receive help for this illness.

About the Author
Louise Gornall is YA aficionado, film nerd, junk food enthusiast, and rumored pink Power Ranger. Under Rose-Tainted Skies is her first novel, and she can be found on Twitter @Rock_andor_roll. She lives in England.