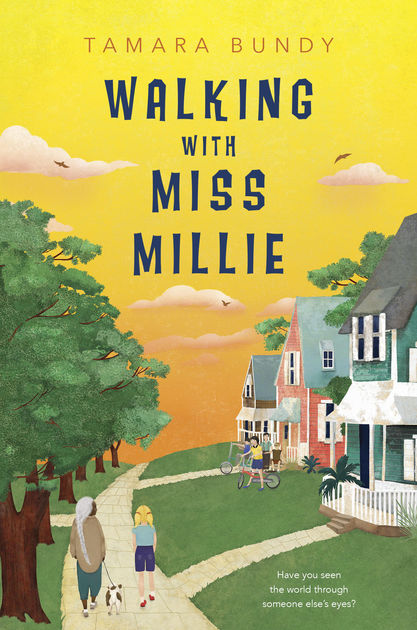 Alice is angry at having to move to Rainbow, Georgia—a too small, too hot, dried-up place she’s sure will never feel like home. Then she gets put in charge of walking her elderly neighbor’s dog. But Clarence won’t budge without Miss Millie, so Alice and Miss Millie walk him together. Strolling with Miss Millie quickly becomes the highlight of Alice’s day, as she learns about the town’s past and meets a mix of its catty and kind residents. As the two become confidantes, Alice is finally able to express her heartache over her father’s desertion; and when Miss Millie tells her family story, Alice begins to understand the shameful history of Segregation, and recognize the racism they need to fight against. Navigating the neighborhood with Miss Millie gives Alice new perspective, the wisdom to move on from her anger, and even enables her to laugh again.

Tamara Bundy’s beautifully written story reminds readers that there is nothing like friendship to lighten one’s load, and make anyplace a home.

*I received a finished hardcopy of the book from the publisher in exchange for an honest review.

I've been trying to read more middle grade books this year because I do like the genre and sometimes I just want to re-experience seeing things through the eyes of a child. Walking with Miss Millie is the debut novel of Tamara Bundy and I'm glad that I got the chance to read it because I ended up liking the story.

Ten-year-old Alice is angry that her mother has uprooted her and Eddie, her little brother, and is moving them to the small town of Rainbow to better take care of Alice's grandmother. It's easy for readers to say Alice is selfish and should understand the situation, but you have to keep her age in mind and realize that this is a child leaving behind friends, the only home she's known, and a life she was used to and felt safe in. Not only that, but her parents were going through something and her father had pretty much turned his back on them. But for most of the story, Alice remains hopeful that he will come for his family, swoop up everybody and take them back to their home. So in the meantime, she works on collecting items that will remind her parents, specifically her father, of their love for each other, all while walking with Miss Millie and her dog.

It was so funny how Alice came to walking with her neighbor. The thing with the phone is actually new to me and I'm glad they don't do that anymore. My gosh, I can't even imagine having a conversation that might not be for anyone else's ears and my neighbor is listening in on the call. Yikes. Anyway, it was an innocent mistake on Alice's part but her mom insisted that she find a way to make it up to Miss Millie, and so the young girl is asked to walk the old dog, Clarence. However, Clarence refuses to be taken by Alice alone, understandable because trust needs to be built, so in turn, Miss Millie starts walking with them just until her dog becomes comfortable with Alice.

Their walks turned out to be rather informative, not only for little Alice but also for me. The things Miss Millie had endured were just heartbreaking. She'd lost so much, and every time she shared a painful story it made me even more upset that racism still exists today! I looked forward to the next walk like Alice and loved the bond these two characters had established, a black woman of old age and a white girl at only ten, in a time and community that still wasn't all accepting of them being friends.

While Alice is growing fond of Miss Millie and Clarence, she fights to hold on to the belief that their current situation is temporary and she's still waiting for her father, no matter how life proved otherwise. She didn't want to allow herself to start liking this new town and its few nice people like her neighbor, the interesting character Pam and her brother that wasn't as mean as other members of their family. But as her father started to disappoint her more and more and the truth became too obvious to ignore, Alice finally came to the realization that she was at home with her grandmother and mother, and even with Miss Millie. In fact, I think her old neighbor played a big part in helping Alice see things clearly and learning to understand that life is tough and sometimes you just have to make the best of the situation. I thought it was amazing that such a young girl could grow so much mentally and at times turned out to be way more mature than some of the people in Rainbow.

Aside from the friendship between Miss Millie and Alice, I also liked Pam's character and the way she connected with Eddie. She tried her best to communicate with him and even went as far as to learn sign language. Not many people would make such a nice attempt and it's sad that Alice tried to push her away earlier, but I got why she did that and was happy when she started to let Pam in. In regards to the mom, I would have loved for her to be in the story more. It's really sad what's happening to the grandmother but Alice's mom is a great daughter and she did a good job with Alice and her brother.

To conclude, Walking with Miss Millie is a great story with youthful writing and interesting main characters. I loved how it's not only depicting an unlikely friendship in a time where that didn't happen a lot, but I also like that you can learn from the story and possibly use a character like ten-year-old Alice to inspire change in your life and others. 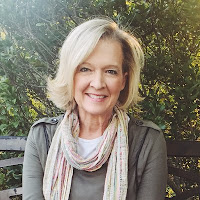 About the Author
Tamara Bundy is a high school English teacher with a Master’s degree in writing, and is a former columnist for the Cincinnati Post (her regular column on being a mom also appeared on EWTN global Catholic radio). Walking Miss Millie is her debut novel. She lives in Cincinnati, Ohio.

Posted by Shane @ItchingforBooks at 1:10 AM