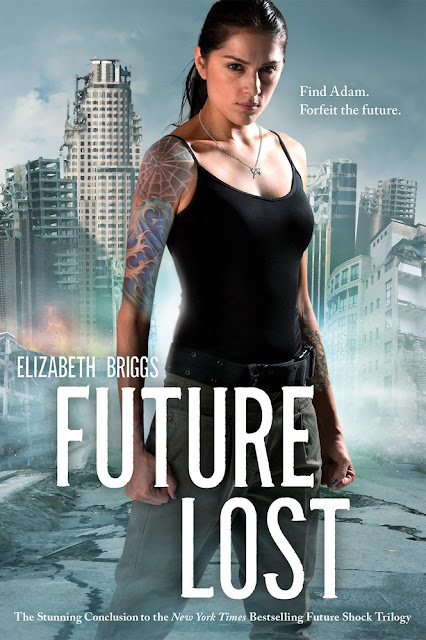 It’s been a year since Elena and Adam were first recruited by Aether Corporation and six months since they destroyed the accelerator, finally putting an end to Project Chronos and their involvement with Aether. Now they’re trying to move on with their lives. Elena’s in college and Adam is working on making genicote, his cure for cancer, safe for the public.

But genicote has become a dangerous fixation for Adam. He’ll do anything to figure it out, and when he goes missing, Elena realizes that he’s done the unthinkable: he went to Aether for help with the cure. To Elena’s horror, she discovers that Aether has created a new accelerator. Adam betrayed her trust and has traveled into the future to find the fix for his cure, but he didn’t come back when he was supposed to. Desperate to find him, Elena decides to risk future shock and time travels once more.

This future is nothing like they’ve seen before. Someone has weaponized Adam’s cure and created a dangerous pandemic, leading to the destruction of civilization. If Elena can’t find Adam and stop this, everyone is at risk. And someone will do anything to keep her from succeeding.

Future Lost had my emotions all over the place. I was switching between excitement and frustration. One minute I'm annoyed with Adam for still keeping secrets from Elena and acting foolishly when he's not even good at taking care of himself or helping anyone else for that matter. The next minute I'm upset with Elena for always being so tough and throwing blame around. It's also the third book and she's still struggling to trust others. Then again, Adam never made it easy for her. Whatever the case, this has been a thrill ride for me, this time-traveling trilogy, and while I did enjoy it, I'm happy that it has come to an end for the characters sake. They can finally move on from Vincent and everything to do with Aether and can find some speck of normalcy.

That being said, I must say I do love where Elizabeth went with this book. Developing a darker future with a pandemic the travelers hadn't experienced before, and unraveling their somewhat peaceful lives in the present. It was evident things were going to start falling apart in the current time from the moment Adam did what he did at the beginning of the story. There was just too much information going back to Vincent and Aether, so it was a matter of time before someone decided to go ahead and abuse those futuristic developments without waiting that many years to do it.

As for the identity of the person who hopped a ride back to the present and added to the chaos, I had guessed it right away, but that aspect of the story was still interesting in itself because Elena and Adam were kept busy in between trying to figure out how to prevent the horrible events of the future and keeping themselves and their friends safe. Although, it was easy to blame Adam for causing all that tragedy with the way he'd been obsessing over developing genicote. Perhaps if he'd taken his time instead of rushing the process, a lot of things wouldn't have transpired. But then again, if they hadn't taken that first trip in book one, maybe everything that happened afterward could have been avoided. Still, towards the end of the story, I understood Adam's intentions and looked at things from his perspective. He wholeheartedly wanted to help people and rid the world of this horrible disease. It wasn't his fault that evil people took something meant to heal and turned it into something so devastating.

Overall, a great ending to this exciting trilogy. Once again, the writing is fluid with no lagging, keeping you interested from start to finish. I couldn't wait to see how things would work out and if all the travelers would be saved. And while their relationship had its complications, I still rooted for the love between Elena and Adam and I'm satisfied with how the author left things. If you haven't started this trilogy I recommend picking it up, especially if you're into Sci-Fi and time travel. You won't be disappointed.

About the Author
Elizabeth Briggs is the New York Times bestselling author of the Future Shock trilogy and the Chasing The Dream series. She graduated from UCLA with a degree in Sociology, currently mentors teens in writing, and volunteers with a dog rescue group. Elizabeth lives in Los Angeles with her husband and a pack of fluffy dogs.