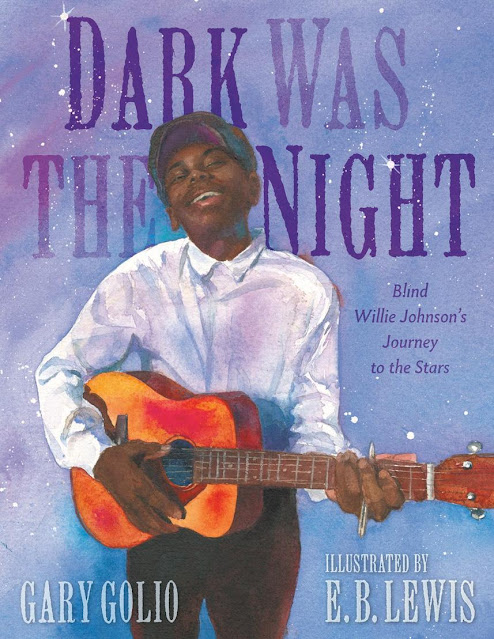 Release date: August 25th 2020
Illustrated by: E.B. Lewis
Publisher: Nancy Paulsen Books
Purchase: Amazon
Synopsis via Goodreads:
The poignant story of Blind Willie Johnson--the legendary Texas musician whose song "Dark Was the Night" was included on the Voyager I space probe's Golden Record
Willie Johnson was born in 1897, and from the beginning he loved to sing--and play his cigar box guitar. But his childhood was interrupted when he lost his mother and his sight. How does a blind boy make his way in the world? Fortunately for Willie, the music saved him and brought him back into the light. His powerful voice, combined with the wailing of his slide guitar, moved people. Willie made a name for himself performing on street corners all over Texas. And one day he hit it big when he got a record deal and his songs were played on the radio. Then in 1977, his song--"Dark Was the Night"--was chosen to light up the darkness when it was launched into space on the Voyager I space probe's famous Golden Record. His immortal song was selected for the way it expresses the loneliness humans all feel, while reminding us we're not alone.

I've been a blues fan for a long time. Early on in my teens, when I listened to Hendrix and a lot of the 60s groups (Paul Butterfield, Cream, Animals), I was hooked on their American blues roots, what inspired them, and gave their music its spark.
Funny thing about those English groups like Cream and the Stones--Hendrix was the first Black American blues man they'd ever met, though Jimi took those roots and sprung some new flowers.
Many years later, in 2002, I wrote my first book for kids about Jimi because I was playing electric blues myself, and appreciated the traditions I heard in his work. Then in 2015, I read two long articles about Blind Willie Johnson--a blind Texas gospel singer and slide guitarist whose music was also steeped in the blues. I was fascinated by the course of his life, and how--three decades after he died--his unforgettable song, "Dark Was the Night," ended up being rocketed into space on the Voyager I space probe's Golden Record (along with Beethoven, Chuck Berry, Bach, and the sights and sounds of Earth).
It's a great story about the surprising turns a life can take--especially when you might think that someone's story has come to an end. Willie had some hit records back in the late 1920s but was pretty much forgotten until Reverend Gary Davis started telling young blues guitarists about him in the 60s.
Then Carl Sagan came along in 1977 with Voyager and asked musicologist John Lomax to help him refine his choices for the amazing Golden Record (kind of like the first CD-ROM). Lomax included Willie's "Dark Was the Night" because he felt it was the embodiment of human loneliness. Something extra-terrestrials would need to know about Earth people if they ever happened upon the space probe and its Golden Record.
Amazing to think that, right now, Voyager is out there beyond our solar system (still transmitting!), and on it is the song of a blind man, telling us not to be afraid of the dark. And if that ain't the heart of the blues, I don't know what is! 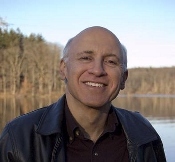 About the Author
Gary Golio is the author of several best-selling and award-winning musical picture-book biographies, including Jimi: Sounds Like a Rainbow, When Bob Met Woody, and Spirit Seeker: John Coltrane’s Musical Journey. Gary Golio lives in Hudson Valley, New York.
www.garygolio.com
Posted by Shane @ItchingforBooks at 12:13 AM