I'm assisting my friend, Kindred Dreamheart, in promoting this idea she came up with. Check out the details below and please support by participating in this super cool event.

When you pick up a new novel, you're probably aren't wondering what the author was wearing everyday or his/her overall sense of style when you're reading about their depiction of a character.  Unless you're like me. Where you want your e-reader case to match your shoes or you're wondering if that dress on page 73 really does exist.

As a freelance fashion designer who always have a book nearby and rarely watch the television, I have a mutual love for both books and fashion. Weird as it may sound. I often wonder why both sectors ignore each other. Just a short while back the nerd look was a trend and I saw many people carrying books and book purses as a fashion statement.

Whenever I host a tour stop with a guest post I tell authors to wax poetic on the fashion of their characters.I often wonder about characters in the novel outside of the basic descriptions like "what would I find in her purse, or in his keepsake shoe box". These things say a lot about the character outside of the story line. It gives me a feel of their personality. For instance, think of walking into the closet of Superman. What small items would I find to identify the owner of such a wardrobe and/or memorabilia? He would have suits, a extra pair of thick rimmed glasses, spandex leotards *lol*....stuff like that. Superman was an easy one, but some authors fail to elaborate on these things in leau of focusing on the main story line.  I'm usually left wondering and piecing together my own conclusions.

A little over a year ago when I was working on a charity fashion show I thought wouldn't it be nice if I put together a similar event online but with books! The idea surfaced again recently while I was aiding in the Baltimore Fashion Week.

Today I announce the debut of Novel Fashion Week! 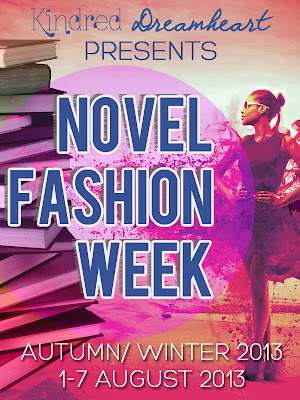 A collaboration of book characters the way we see them if they were to step out of the pages and grace the runway.

Featuring guest posts from book bloggers and authors all week.

A week of bookish runway shows, workshops and original  photography, among other things.

Are you looking to strut your stuff on the virtual catwalk? Or perhaps be a sponsor?

The casting call is NOW live...

Posted by Shane @ItchingforBooks at 9:55 AM