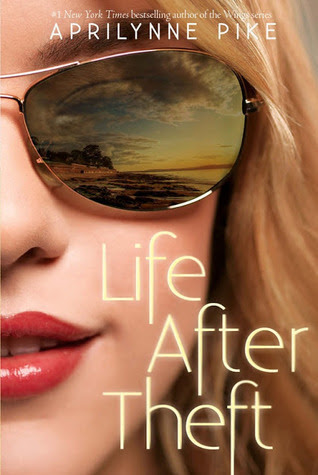 Life After Theft
by Aprilynne Pike
Expected Publication: April 30th, 2013
Publisher: HarperCollins
Purchase: Amazon
*I was approved for the ebook by the publisher via netgalley.

Moving to a new high school sucks. Especially a rich-kid private school. With uniforms. But nothing is worse than finding out the first girl you meet is dead. And a klepto.

No one can see or hear Kimberlee except Jeff, so--in hopes of bringing an end to the snarkiest haunting in history--he agrees to help her complete her "unfinished business." But when the enmity between Kimberlee and Jeff's new crush, Sera, manages to continue posthumously, Jeff wonders if he's made the right choice.

The story started out really fast pace, humorous, addicting, and overall interesting. I was enjoying it all the way because 1) I had no idea there was a ghost involved, and 2) I had no idea the ghost was the one dealing with "life" after theft. You see I didn't read the description prior to going into the book nor did I have any idea it was based on another book that I've never read much less heard of. *hide's face*

It's high school. So, there will be drama, which I might say was entertaining while it last. There were several things about Life After Theft that I liked, including the fact that the story's told from the POV of a guy, which is rare for me to read. But sadly, I couldn't really connect with his character. Jeff irritated me a bit, with not only his wimpy behavior but also how it seemed as if the writer was proving his masculinity in several scenes. I didn't dislike him persay, just never got into his character much. I did however, like the romance between him and Sera, though not pulling but quite acceptable. Who knew things would turn out like that? I had my suspicions but I wouldn't say it was predictable. Just a little dry.

The one person I did like a lot was Kimberlee. No matter how bratty she was at first I found her spirit rather amusing. I related with her emotional breakdowns and the reason why she wanted to return the items she stole. I also enjoyed the developing connection throughout between her and Jeff. That was a great aspect of the story. It all seemed so interestingly different.
Anyhoo, character wise, not a lot of them stuck with me nor did I really see their potential. But I was pleased with the ones that stood out: Kimberlee and Sera. The latter because of all the factors surrounding her.

What else? Oh, yes. The writing was good; the overall premise of the story was good. At the beginning. But then towards the middle and thus forth, it kind of fell flat. Not the writing, but the direction of the story. Does that make sense? I started losing interest in everything that really had me hooked at the opening. Scenes came off plain and not entirely necessary. The initial concept of returning the stolen items turned into an exciting project for characters I didn't exactly cared for, stuff got too unconvincingly serious and not entirely in depth, and I felt like it lost sight of Kimberlee somewhat. I know she's like the second main character, even though she's dead (But she is on the cover. Why is she on the cover?). At one point I began missing her because for some reason she didn't seem to be present that much.

But I was interested...to see how it would turn out.

In conclusion, I fell from a full on 5 star rating to just 3 because the momentum fizzled for me. It was a good book, just didn't stay on course of being as entertaining as I initially thought it was. Witty writing, dramatic teenagers, dead girl recovering from a problem. I recommend Life After Theft because it is a light read.

Aprilynne Pike has been spinning faerie stories since she was a child with a hyper-active imagination. At the age of twenty she received her BA in Creative Writing from Lewis-Clark State College in Lewiston, Idaho. When not writing, Aprilynne can usually be found at the gym; she also enjoys singing, acting, reading, and working with pregnant moms as a childbirth educator and doula. Aprilynne currently lives with her husband and three kids in Utah, and dreams of warmer climates.


Aprilynne Pike's #1 New York Times best-selling debut, WINGS, is the first of four books about a seemingly ordinary girl with a not-so-ordinary destiny. In this tale of magic and intrigue, romance and danger, everything you thought you knew about faeries will be changed forever...

Posted by Shane @ItchingforBooks at 1:16 PM