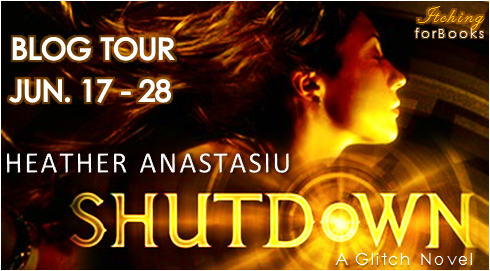 The blog tour for Heather Anastasiu's third book in the Glitch series, Shutdown, has ended.

The battle is all but over, and hope seems to be lost. Zoe and her fellow Resistance fighters are on the run, having lost their home, their protection, and their leader. They are outnumbered and outmatched by the powerful corporation that controls the world, and the cruel Chancellor is inches away from completing a scheme that would kill most of humanity. Zoe's only remaining option is to chase the impossible dream of upending the Link system, freeing the world from the hardware that controls their thoughts and emotions, and hope it will trigger a revolution.


The plot requires a nearly impossible mission to infiltrate the dangerous Community, and it is a task that Zoe must unfortunately complete alone. With challenges and surprises at every turn, nothing goes according to plan. Adrien's visions of the future now show two possible outcomes: one in which they succeed, and one in which humanity falls. It all lies in Zoe's hands.

Full of romance, high-adrenaline action and shocking twists, Shutdown is a heart-pounding conclusion to an exciting sci-fi adventure trilogy for young adults.

The thrilling conclusion to an action-packed sci-fi trilogy.

About the Author
Heather Anastasiu grew up in Texas and recently moved to Minneapolis with her family. When she's not busy getting lost exploring the new city, she spends most days writing at a café or daydreaming about getting a new tattoo.

JUNE 21 - The Bookshelves *Review
Beauty and the Bookshelf *Blurb

No posts on Saturday & Sunday

Posted by Shane @ItchingforBooks at 10:00 AM