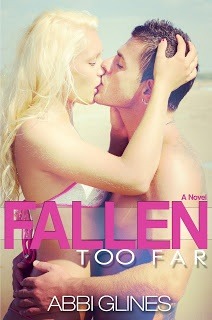 To want what you’re not supposed to have…

She is only nineteen.

She is his new stepfather’s daughter.

She is still naïve and innocent due to spending the last three years taking care of her sick mother.

But for twenty-four year old Rush Finlay, she is the only thing that has ever been off limits. His famous father’s guilt money, his mother’s desperation to win his love, and his charm are the three reasons he has never been told no.

Blaire Wynn left her small farmhouse in Alabama, after her mother passed away, to move in with her father and his new wife in their sprawling beach house along the Florida gulf coast. She isn’t prepared for the lifestyle change and she knows she’ll never fit into this world. Then there is her sexy stepbrother who her father leaves her with for the summer while he runs off to Paris with his wife. Rush is as spoiled as he is gorgeous. He is also getting under her skin. She knows he is anything but good for her and that he’ll never be faithful to anyone. He is jaded and has secrets Blaire knows she may never uncover but even knowing all of that…

Blaire just may have fallen too far.

Fallen Too Far wasn't as impressive as I'd hoped it to be. Honestly, from all the raves about this book I was expecting...fireworks. Sadly, the story just didn't seem too solid and at times I felt it a tad rushed. What started out as something I could dive into, with a funny and interesting opening chapter, turned out to be a typical read.

The good: I did like the innocent southern girl and bad boy concept. The sadness Blaire was dealing with had me opening up to her and Rush got me curious about what he and everybody else was trying so hard to hide. That part made me want to keep reading to figure things out. I liked the mystery.

The not so good: A lot of the segments were cheesy, and those heated moments were too drawn out and left a bitter taste in my mouth. Another thing was the way in which Bethy was portrayed. Her character just seemed too forced into the story and she didn't appear strong enough for me to care for her presence. Also, the way in which she's portrayed was just too much to handle. Other characters that dropped in and out, like Drake and Woods in particular, could have been more developed.
Another thing was the sudden spark between the main characters. I'm actually one of those readers who don't mind instant connection but this one felt like there was just too much too soon, and I wasn't buying into their feelings until the very end.

What I really liked: The ending. Emotions started to appear even more realistic and I actually felt like crying for the pain Blaire was feeling in that moment. That ending added another star to my final rating, along with the fact that I liked how the main character could handle a particular weapon and how brave she was in life after experiencing so much on her own.

Overall, it started out alright, fell flat in between then picked up towards the end. Definitely a roller coaster of a book but I will continue to see how the story improves and how the main characters will move on from here.

Posted by Shane @ItchingforBooks at 10:27 AM