Review: Hopeless For You by Hayden Hill 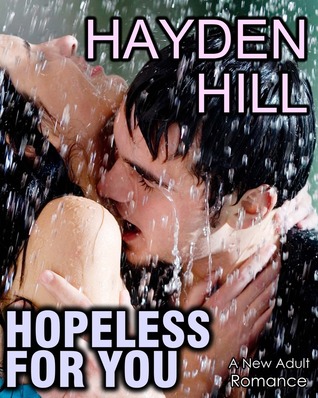 *A copy was provided by the author for a honest review.

I don't know where to start. Hopeless For You had me on a world wind journey of two people not exactly trying to find themselves but ended up doing so regardless, experiencing a deep connection along the way.

Once the story opened up it painted a clear picture of the kind of life Kade was living. Beware, this book is not for the modest. Kade's behavior was nothing new, in fact, Hayden presented realistically well the attitude of a guy who was definitely using the carefree lifestyle as a protective wall. Then we meet Ash, who was doing the same thing in her way. Ash had been clinging on to guilt ever since losing someone dear to her. Both characters had a lot of emotional baggage; their pasts have left a mark on their lives so much that it kept them from finding happiness. And I liked how coming in contact with each other really brought out that vulnerable side and got them to open up once more.

Of course, the first encounter wasn't great but you'll understand why as their feelings pour out in the pages. And I liked that there's progression as well as stubbornness. Eventually, what began as a case of two people with undeniable intensity between them yet trying hard to dismiss the tension, are suddenly careened into a situation where they must depend on each other to survive. I must admit though, did not see nor expect that part coming but it was an interesting aspect nonetheless.

Aside from all that happened during their isolation and period of survival, I was looking forward to a new start from both characters. Whether it was Ash finally taking control of her lifelong dream and going after it, as well as Kade dropping the tough guy act and finally being honest with himself. Never imagined it would morph into something so difficult for both.

Hopeless For You had a great setting. I envisioned every scene as well as everything and everyone mentioned. When it rained in the chapters I could smell it in the air. That's how much I was entrapped in the story. It's also pretty fast paced and witty. Hayden Hill brought to a life a tale of what seemed like endless hurting to a future filled with joy. If you love new adult and anything romantic with a bit of adventure and side humor, this book is for you.

About the Author
Hayden Hill is a New Adult Romance author. Her debut novel, Hopeless for You will be released in September 2013.
Writing HOPELESS FOR YOU was an emotional rollercoaster for Hayden. It started out as a rosebud of an idea which grew into this all-consuming tree. She poured everything into the book, heart and soul. It was a labor of love that’s for sure. They say that great art comes from pain. Well then Hopeless For You is her greatest work yet.

Posted by Shane @ItchingforBooks at 12:00 PM