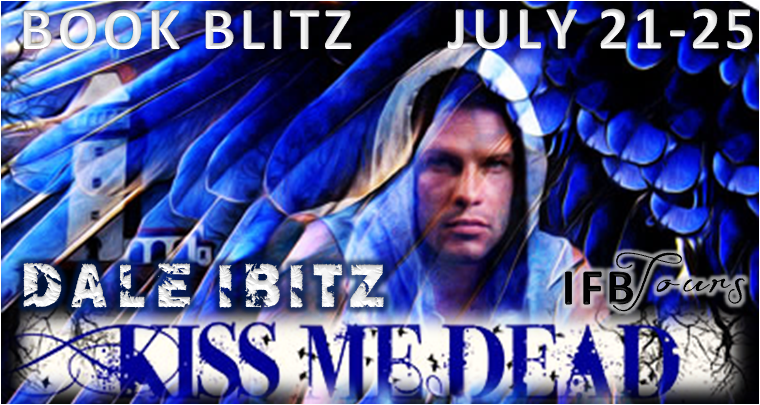 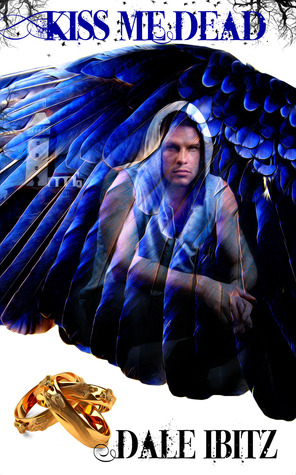 
Christian, a nineteen-year-old reaper-human hybrid enslaved to the Other World to harvest souls, earns his freedom by making a bargain with the Goddess of Death. As part of the bargain, he’s been cursed with the kiss of death.
One kiss…


The only way Christian can break his curse is for an angel to kiss him. Willingly. He finds Brooke, an nineteen-year-old descendant of a Naphil whose destiny is to hunt rogue reapers. But she’s hiding, suffocating in a semi-agoraphobic cocoon since witnessing a reaper steal her brother’s soul.
Two destinies…


Christian has found the angel who can break his curse, and the seduction begins. To break her phobia’s hold, Brooke embraces her angelic role and makes it her mission to kill rogue reapers, trying to avenge her brother’s murder. Christian can break his curse by kissing Brooke dead ... but will she figure out his game and kill him first?

Dale Ibitz was born in Oxford, Connecticut, grew up in the state of Washington, and then re-located back to Connecticut as an adult. Always a lover of books, she spent much of her childhood reading, visiting the library (her best friend’s mother was a librarian…how convenient), and writing. She majored in English at Central Connecticut State University, and while Dale holds a full-time day job where she’s immersed in the dry life of writing contracts, she’s been writing young adult fantasy and mid-grade contemporary for seventeen years (on the side, of course).


If you were to visit Dale’s house, you'd meet her husband, 2 kids, their dog Lea (most people simply refer to her as The Beast...and for good reason), their kitten Luna (affectionately known as Loony Luna), a gaggle of ducks, and a flock of hens ruled by a tyrannical rooster they call The Stump, or Stumpy. How he got his name is a long story...maybe she’ll tell you sometime.

Christian watched the dying girl and did nothing.

He longed to do something—anything—to save her, but it wasn’t his place, his calling, or his duty. His duty was to wait for her death, then act.

Giltine, Goddess of Death, had branded the girl for death, the mark on her cheek glowing like slick silver while wet moonlight clung to her breasts. Her flailing arms and flooded gasps forced Christian’s eyes to close and his hands to clamp over his ears.

Nothing could stop the sound of death.

He could taste the girl’s fear; blood-metallic, like pennies. Even though he yearned to run, he wouldn’t. He would stay. He’d wait for her death then reap as he was bound to do.

Inhaling, he closed his eyes, scenting Giltine’s addictive poison, a sweet nectar reapers craved. He was a slave to her and to his addiction, just as the girl was a slave to death. Neither could escape their fate.

But no matter how many times he tried to abstain and break his addiction, no matter how fervently he wished for death to claim him, to awake and find Giltine’s mark glowing silver on his cheek, he would continue to exist, if only to hunt for death.

The girl’s hands slapped the water. She slid deeper into the shadowy lake. Pulse in his neck throbbing, he swallowed, trying to remain detached and unemotional as a proper reaper should. Unfortunately, he was also human. His humanity made him suffer.

As he edged closer to the water, sweat formed along his hairline. The mark on the girl’s cheek shone brighter, sweeter. He licked his lips. It was almost time.

Trembling with need, he rubbed his thumbs along his pants’ seams. He’d gone too long without a soul-hit, and cold rotted him from the inside. The longing for poison that tightened his stomach also made his lips twist in disgust. Not wanting to watch this beautiful girl die with hungry anticipation, he turned his head away.

Water covered the girl’s mouth, sucking out one last, drowning breath before consuming her nose and fear-glassed eyes. She sank below the surface.

Christian sighed. It was done. The silence, however comforting, didn’t dispel the echoes of the girl’s dying breath lingering inside his head. He shuddered.

The girl’s stillness revived the nocturnal silence: the grinding cheeps of tree frogs, an owl’s chirruping hoot. Wooden docks stretched into the water like skeletal fingers. A red fox’s tail flashed. Not willing to enter the water, he waited on the shore for the girl’s soul to emerge. The spring lake water was snow-melt frigid, and he detested both the water and the cold, as all his kind did.

Moments later, like dust motes in a sunbeam, the girl’s soul appeared. Her skin shone with an ethereal glow, a result of Giltine’s poison, and her hair hung in damp ringlets. He could almost taste the sweet poison, so saccharine as to make his teeth ache.

He studied the drop of water that tickled the girl’s neck and trailed between her breasts. To him, her soul appeared as alive as her living form had been. He knew that once she crossed to the other side, the embodiment of her physical being would dissipate and he’d no longer be able to see her, feel her, smell her. Until then, however, she was real to him.

Realizing he was staring, he bit his lip and focused on the ground. The girl might be dead, might no longer care about decency or modesty, but he believed in dying with dignity. He scooped up her dress.

“Put it on.” His voice squeaked like an adolescent boy’s.

The girl hesitated then took the dress. He averted his gaze until she slipped it over her head. The dress was old, with a frayed hem and torn collar. Most of the buttons were missing, and it barely covered her nakedness. The loose flapper-style made her seem like a young girl, but he’d seen her nude, and her figure suggested she was one or two years older than him; maybe twenty-one.

Unable to stop himself, he slid a fingertip along her cheek, the silver mark sweet and sticky like icing on a hot bun. When he licked his finger, Giltine’s poison shot like bathtub gin down his throat and seared his lungs. His sigh bordered on a groan.

“Who are you?” She was pretty, with cat-green eyes and hair he was sure would lighten like honey when it dried.

He held still, watching her while sweat collected along his back. Despite the aching need, and despite the small taste he’d just sampled, he couldn’t take her soul completely. He had to wait until he took her to the Void, and for her to make the decision to cross to the Other World. If he didn’t follow the rules, there would be punishment.

Lines wrinkled her forehead. Her pain leaked fragile ribbons that looped around his chest. His Other World senses allowed him just enough information to lure her there, and he could taste the earthy flavor of her confusion. Some might consider such knowledge cheating; Christian considered it a means to an end.

Posted by Shane @ItchingforBooks at 11:17 AM