Review: Sharing You by Molly McAdams 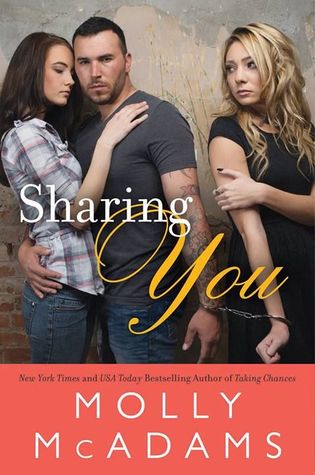 Twenty-three year old, Kamryn Cunningham has left all she’s ever known and moved to a small town where no one knows her name, who her parents are, or her social status in the horseracing world. Months after opening her own bakery and evading attempts of being set up by her new best friend, she meets Brody. Kamryn fights the instant pull between them because there’s a detail she can’t dismiss. Brody’s married.

To say that twenty-six year old, Brody Saco has had a rough marriage would be an understatement. After marrying his pregnant girlfriend, he spends the next six years in a relationship filled with hatred, manipulation and guilt involving a tragedy that happened five years earlier. When he keeps running into his sister-in-law’s best friend, Kamryn, he can’t ignore that she makes him feel more with just one look than his wife ever has; and soon he can’t continue fight his feelings for her.

When staying apart proves to be too difficult, Brody and Kamryn enter a relationship full of stolen moments and nights that end too soon while they wait for Brody to file for divorce. But the guilt that comes with their relationship may prove to be too much for Kamryn, and Brody might not be strong enough to face the tragedy from his past in order to leave his conniving wife.

Not sure where I stand with this one. I get the plot. I do. Brody was in a terrible situation with a very manipulative person, and Kamryn was the right girl to give him the love he deserved. My issue with the story is that I felt like it started out good, then started to drag from the middle onward. I also got frustrated with the main characters. I was mad at Brody for staying with that bitch for that long. And I wanted to punch him for not waking the hell up. It was so obvious that she was using her head on him. Even if it was too hard for him to see, why did he let himself suffer with her bullshit for so long? He didn't love her. He married her because she got pregnant. So why let her problems be his? He should have left her to her parents, especially with the way they were. I get the guilt, but that was too draggy to me.

As for Kamryn, hmm...she should have been honest about herself to Brody when they started seeing each other. I guess her story was kept hidden to create drama but when it was revealed I was not moved by that whole scene at the bakery at all. That's because it took too long. Besides those things, she was an all right character. She felt the guilt and the emotions of being the other woman, in spite of the situation and how unhappy Brody was.

I did like the idea of the story and how it depicted that these people weren't some morons caught up in a steamy affair while the sweet and unknowing wife was at home waiting. This wasn't the case and because of the way Olivia was, I was not affected by what Brody and Kamryn were doing and I actually rooted for them. But like I mentioned before, it just dragged too much.

So overall, it was an okay read. I did like Jace and Kinlee, especially the latter. She was funny and provided a comic relief in some scenes. I liked how the story ended with them finally being granted something they've always wanted. The writing was also good, and I do look forward to continuing the next chapter. However, I hope it won't be as stretched as this one.

Posted by Shane @ItchingforBooks at 9:35 PM