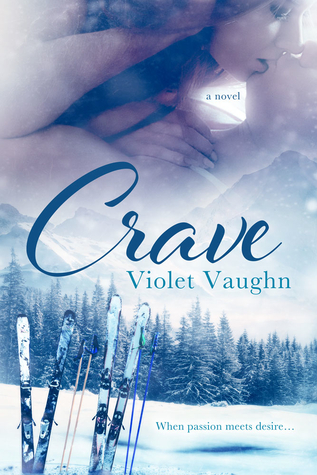 Casey Cassidy is a girl who gets what she wants.

Determined to get over Jason and find a man that wants a family, she moves to Breckenridge, Colorado.

Landing a job skiing every day, Casey finds Blaine Johnson - a wish come true. A hunky surfer turned ski instructor, he checks off every requirement on her list.

Except for the one she forgot to add.

Blaine has a secret. A secret so big it keeps intimacy smoldering, when Casey needs fire. No matter how hard she tries, the embers won’t ignite. Can she live without passion to get the family she craves?

When Jason comes to town, Casey questions everything she wished for. Their consuming love threatens to explode and ruin her dream. Will she have to choose between a family and the love of her life?

*Downloaded the kindle ebook for free on Amazon

Crave certainly has it perks, but there were things about the story and the main character that didn't win me over.  The plot was okay, but I just didn't feel the fireworks.

Like Casey, my emotions were all over the place throughout the story. It jumped right into her predicament of not being able to let go of her ex, Jason, when she immediately called him after finding a boyfriend cheating on her. I could feel the intensity between Casey and Jason and didn't understand why she was having such a hard time just enjoying life with him instead of focusing too much on what he wasn't sure about.
I would have love for there to be a back story, to give a better understanding of Casey and Jason's love and where they were coming from. Maybe that would have given me more clarity of the situation.

Let's talk Casey. There were moments where I wanted to shake her. I thought that the whole thing with Blaine was too forced and like her best friend said, she was pushing for something that just wasn't. To me, it was silly of her from start to want to move on so quickly, knowing very well how in love she was with Jason. With a deep love like that, there's no way you can move on in a matter of weeks, especially if you're pushing things to happen with someone who clearly showed signs that he was forcing it as well. I mean, how could she not see the warning bells? Blaine was obviously trying too hard to cover up the truth and the mere fact that they couldn't get pass a particular level in their relationship should have made Casey open her eyes.  That aside, her character wasn't too bad. She was a kind enough person and I liked how she was there for Blaine and her friend when they lost someone so important to them. That again was something that should have made her realize who Blaine was.

As for Jason, he's a sweetie and too good for Casey. Kudos to him for tolerating so much with her. She really gave his heart hell and messed with his emotions by calling him up for a booty call whenever she missed him. I was super happy when he shot her down after she finally opened her damned eyes and saw what a great person he was, and that he's the one she should be with. I liked that he made her work for him. Go Jason!

There were other good aspects of the story, like the characters' skiing interest and how good they were at what they did. I'm not much of a fan of ice sports, outside of figure-skating, so I didn't understand some of the details mentioned in the story whenever Casey or another character was out on the ice. Honestly, I didn't care too much for it either, but it's okay because that's part of the story and its characters.

The writing was easy and the pace was just right. I never felt stuck in a moment, just that some things bothered me about Casey. Whether it was her impulsive decisions or the fact that she made Jason suffered along with her, I just didn't connect to her character as much as I would like to. But like I said, the story was okay, and I would like to continue with the series.