Review: Addy And The Smart Guy by Carter Ashby 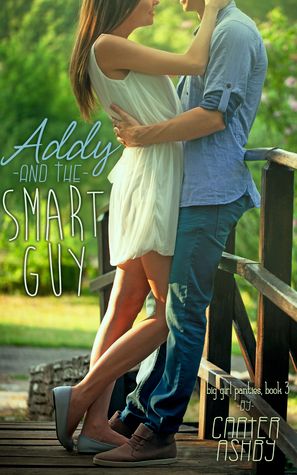 If it weren’t for her best friends, Zoey and Maya, Addy Hart would be a prudish, uptight Barbie doll. Thankfully, through love and persistence, they’ve helped introduce her to her wild side. Unfortunately, even her wild side doesn’t have the courage to go after the one thing she wants more than life itself.

Dr. Greyson McDaniel has resisted his lovely teaching assistant for three years, now. He has no intentions of endangering his job or her reputation. But as spring break approaches, he’s seized with a wicked impulse. He invites her to his mountain retreat for a week. Just one week of intense escape.

What they both discover after their affair is that a week isn’t nearly enough. But as much as they long to be together, there are obstacles in their way, and the ethics of student-teacher relationships are the least of their problems. When she realizes how deeply rooted Grey’s commitment issues are, Addy begins to despair of ever having a happy ending with him. But Addy’s love might be just what’s needed to free him of his past.

I didn't read the first two books so I'm not sure what Addy's character was like prior to this one, and according to the blurb she's just now starting to loosen up. However, I liked her personality and how she found the courage to put her feelings out in the open. Although, anyone could see she felt so strongly for Greyson. Even he could but he chose to stay in denial.

This book! It really sent me on an emotional roller-coaster. There were times (many) that I wanted to slap Greyson for the things he'd say or what he'd put Addy through. I mean, what the hell, she'd sacrificed so much for him and he was too afraid to just commit to her. I get that the situation is sticky, with him being a teacher and she a student, and I could sympathize with what he's been through with his family, but obviously he can trust Addy not to hurt him like that.

Grey's inability to be honest with himself caused Addy pain, because while she had a hard time detaching her heart from him, he was going about with other women. Like what the hell! His behavior aggravated me a lot. But you know what, I liked the story. I liked Addy and her relationship with her best friends, and I liked the other guys. It's a sweet, and often times sour story that isn't far-fetched from what some people in this age group go through in real life.

Loved the writing and how the author brought these characters to life, each with their own interesting addition to the plot. Also, I liked how things wrapped up in the end. It certainly was a long time coming and I felt emotionally drained by the time Greyson opened his damn eyes, but it was a sweet relief. Again, nice story. I'm curious enough about the other girls' relationships and I'm definitely going to read the first two books to catch up on what went down with them.

About the Author
Carter Ashby is the author of small-town, contemporary romance novels, including the Big Girl Panties Series, Not A Chance, Without You Here, and The Closer You Get. Find out more by visiting her official website www.carterashby.com or connect with Carter on social media:
@carterashby | facebook.com/CarterAshbyRomanceAuthor


Posted by Shane @ItchingforBooks at 11:06 AM