Review: Everything I Left Unsaid by Molly O'Keefe 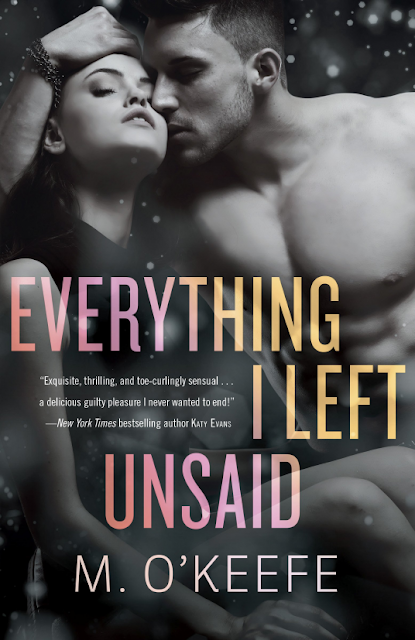 Fans of Jodi Ellen Malpas, K. Bromberg, and Joanna Wylde will be unable to resist this sexy, deeply intimate tale of a woman running from her past, and the darkly mysterious man who sets her free.

I didn’t think answering someone else’s cellphone would change my life. But the stranger with the low, deep voice on the other end of the line tempted me, awakened my body, set me on fire. He was looking for someone else. Instead he found me.

And I found a hot, secret world where I felt alive for the first time.

His name was Dylan, and, strangely, he made me feel safe. Desired. Compelled. Every dark thing he asked me to do, I did. Without question. I longed to meet him, but we were both keeping secrets. And mine were dangerous. If I took the first step, if I got closer to Dylan—emotionally, physically—then I wouldn’t be hiding anymore. I would be exposed, with nothing left to surrender but the truth. And my truth could hurt us both.

I was met with intrigue the moment I started reading Everything I Left Unsaid. I wanted to know more about Annie and why she was obviously hiding out in a trailer park. There was definitely something that had terrified her enough to run away from her home, and I was eager to find out what.

Things got a bit more complicated, or rather interesting for her, when Dylan called the phone in her trailer and she answered. Not a lot of people would continue calling each other, but Dylan made Annie curious and somewhat brave. Over the phone, she could embrace a side of her she was once afraid to express, and do things she never thought she would. So from their first accidental conversation, the story took off and became extremely interesting. Annie started to explore a more sensual life, doing things that Dylan would tell her to do. And one might say she was falling back into old habits, allowing a man to have such a control over her and provide rules she had to follow, but I think it was different in that instance because she was only talking to Dylan on the phone and she could say no and hang up anytime she want. But, Annie was also enjoying herself for the first time, so it seemed like a win win for her and Dylan.

As the story progressed, it became clearer what had happened to Annie and why she'd ran away. She had suffered greatly throughout her life and was desperately trying to escape her past and finally feel a sense of safety. She held reservations with Dylan, someone who obviously had secrets of his own, but she couldn't deny the fact that she liked the way he made her feel even if it was over the phone. Soon, having conversations with a faceless person wasn't enough. She had to meet him. She yearned for the chance, and when she admitted that he refused her.

It took something dramatic at the trailer park, which involved the one person Dylan asked Annie to stay away from, for these two complicated and flawed characters to eventually meet. And their first encounter was just so intense. I felt the angst between them. How desperate they were for each other and how difficult it was for them to suppress their feelings. I had my suspicions about what had happened to Dylan and why he lived such an isolated life, but when Annie was giving descriptions of the man in front of her. My stomach tightened. I felt so sad for Dylan, but truly happy that in spite of his accident and how insecure he must feel about his appearance, Annie still wanted him. And I was even more estatic that for someone like Annie who thought she was unwanted for so long, would finally feel desired and respected the way she deserved.

All in all, it was a really good story with two interesting characters. Individually, they both added something solid to the plot and made me, the reader, seriously intrigued. I loved the writing and the inclusion of other elements to the story. For instance, someone like Annie spotting another woman going through the same thing she did. I would have liked to see how that situation played out, and hopefully those side characters will return in book two. But again, great story. Bittersweet. Intense. Very sexy. I recommend.

About the Author
Molly O'Keefe has always known she wanted to be a writer (except when she wanted to be a florist or a chef and the brief period of time when she considered being a cowgirl). And once she got her hands on some romances, she knew exactly what she wanted to write.
She published her first Harlequin romance at age 25 and hasn't looked back. Molly loves exploring every character's road towards happily ever after.

Posted by Shane @ItchingforBooks at 11:33 AM