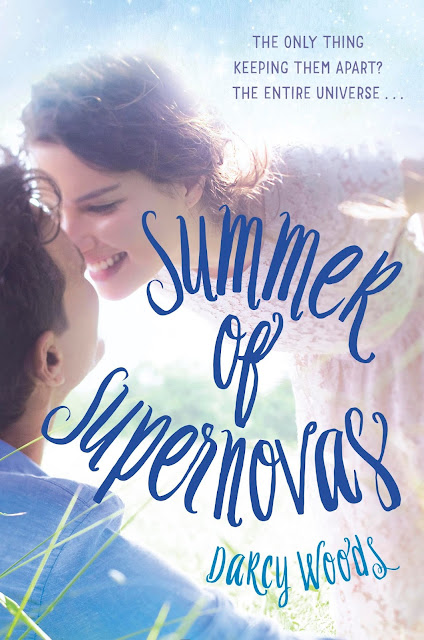 
Fans of Jennifer E. Smith and Jenny Han will fall in love with this heartfelt and humor-laced debut following one girl’s race to find the guy of her cosmic dreams.

When zodiac-obsessed teen Wilamena Carlisle discovers a planetary alignment that won’t repeat for a decade, she’s forced to tackle her greatest astrological fear: The Fifth House—relationships and love.

But when Wil falls for a sensitive guitar player hailing from the wrong side of the astrology chart, she must decide whether a cosmically doomed love is worth rejecting her dead mother’s legacy and the very system she’s faithfully followed through a lifetime of unfailing belief.

I was curious after reading the blurb for Summer of Supernovas. I've never read a story about a character who was obsessed with astrology and such so I wanted to see how this would play out. It ended up being quite a delightful read with silly, sweet, as well as tearful moments.

The story opened up on a funny note with Wilamena being confused for someone about to commit suicide. Her sweet savior, Grant, and her later developed quite an interesting connection, but due to Wilamena's insistence on finding the perfect guy with the right zodiac sign, and mistaking Grant for the sign that she was told to avoid, she ends up pushing aside her true feelings and gets involved with another. Okay, that even sounds silly to me, but as the story moves along and we get an understanding about Wilamena's promise to her deceased mother and how much they bonded over astrology, I grew to understand why she was adamant on dating Seth, whom she believed to be the right one for her.

Countless times throughout the story I rolled my eyes at Wilamena. Because like Grant, I believe people should listen to their hearts and not their daily horoscopes. I mean, for the majority of the story she basically forced herself to like Seth and constantly ignored how she felt for Grant. Because of this the situation grew more intense. These two guys were brothers, and certain things could have been avoided had she been honest and not accept Seth's advances in the beginning based on his sign. But even though this frustrated me about her, I kept on reminding myself that this was something she truly believed in and a promise she wanted to keep. In a way, it kept her mother alive in her heart. And in all honesty, I have used astrology in the past as a way to either avoid or give certain people a chance. Yep, I'm guilty. But I was never as extreme as Wilamena, and her thoughts and behavior throughout the book might put off some people if they don't establish an understanding of her character.

In regards to the guys, Grant had me from the moment he overlooked his fear of heights to try and save Wilamena. That was very selfless of him. And more than anything I loved that he was a musician. Creative guys in books always wins me over. Seth on the other hand, I couldn't warm up to him. When he and Wilamena met for the first time, it just seemed like he was trying to win her over his brother or something. He just didn't seem very genuine. I didn't like how he was for the rest of the story either. And when he revealed the truth to Wilamena in the end, I wasn't even surprised. Seth seemed like that kind of guy.

As for other characters, her best friend was an interesting one but I didn't really connect with her. Maybe I was just too caught up in Wilamena's world and wanting to know how long it would take for her to realize she had to be honest with herself and the guys. And I was happy that in the end, she saw the light and understood what her mother really wanted for her. Thanks to her grandmother, which by the way had some good moments as well as some sad ones. Glad things turned out the way they did.

Summer of Supernovas is nicely written and serves up the right amount of fun and sweetness for those looking for a youthful read. And if you're as zodiac-obsessed as the main character, I hope you'll become enlightened by the end of the story the way Wilamena had. Don't rob yourself of a real connection and pure happiness because of their astrological sign.


She lives in Michigan with her madly supportive husband, two tuxedo cats (who overdress for everything) and a closet full of neatly organized shoes. Once upon a time, she served in a US Army aviation unit and threw live grenades. Now she throws words.