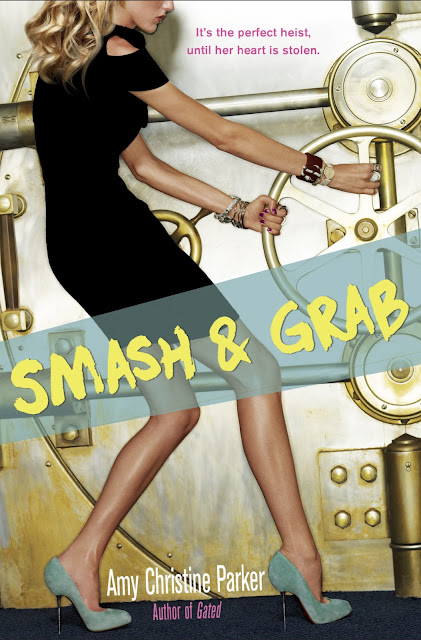 Ocean’s Eleven meets the star-crossed lovers of West Side Story.Grab some popcorn and get ready for an adrenaline-filled heist!

LEXI is a rich girl who loves a good rush. Whether it’s motorcycle racing or BASE jumping off a building in downtown Los Angeles, the only times she feels alive are when she and her friends are executing one of their dares. After her father’s arrest, Lexi doesn’t think twice about going undercover at his bank to steal the evidence that might clear his name. She enlists her hacker brother and her daredevil friends to plan a clever heist.

CHRISTIAN is a boy from the wrong side of the tracks. The local gang has blackmailed him and his friends into robbing banks, and he is desperate for a way out. When the boss promises that one really big job will be the last he ever has to do, Christian jumps at the chance for freedom. In fact, he’s just met a girl at the bank who might even prove useful. . . .

Two heists. One score. The only thing standing in their way is each other.

Told in alternating points of view, this caper is full of romance and fast-paced fun. Hand to fans of Perfect Chemistry, The Conspiracy of Us, and Heist Society.

*Publisher provided physical copy in exchange for an honest review.

I fell in love with Amy's writing in the Gated series. I really enjoyed those two books and was utterly lost in the world of cults and how tough it was for members to move on from that life. Smash & Grab is a stretch from Gated, and I do like that the author doesn't restrict herself and is writing in other genres. But even though it's lighter in a sense and has an interesting premise, I just wasn't in love with Smash & Grab as I would have liked to be.

In regards to the characters, I did like the fact that it alternated between Christian's and Lexi's POV, but I didn't really connect with them as much, especially with Lexi. There was just something about her character that prevented me from really warming up to her. And I did sympathize with the fact that her father got in serious trouble and her family was in disarray because of it, but when it came to Christian's situation, I was more empathetic for him.

The blurb gave me the impression that there would be lots of exciting scenes, but there wasn't much, in my opinion, and I felt like some parts could have moved along while others, in particularly the ending, could have slowed down a tad. Still, it's an interesting story. There were funny moments and scenes where Christian and Lexi experienced a romantic connection, but when it was serious it was serious. Like with Christian's situation; the way gangs impact communities and how desperation from wanting to help your family can lead to terrible decisions and land you into bigger trouble. I thought the author did a good job in touching on that issue and the depiction of how the gang operated came off realistic.

Overall, Smash & Grab is a good story but with some issues that held me back from fully enjoying it. I did like how things worked out for the characters and that their lives started to change for the better. Again, I'm happy that Amy isn't limiting herself to one genre and is branching out, and I look forward to reading her next release.

About the Author
AMY CHRISTINE PARKER earned her degree in elementary education at Southeastern University in Lakeland, Florida, and then proceeded to try out many different jobs, including collectible doll maker, fondue waitress, and inner-city schoolteacher. It wasn’t until she became a mom and began making up bedtime stories for her children that she finally realized what she was meant to do. Now Amy writes full-time from her home near Tampa, Florida, where she lives with her husband, their two daughters, and one ridiculously fat cat.

Posted by Shane @ItchingforBooks at 9:21 AM