Review: All Is Not Forgotten by Wendy Walker 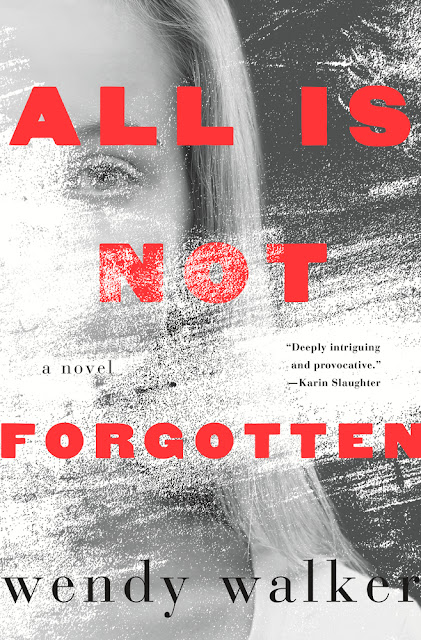 In the small, affluent town of Fairview, Connecticut everything seems picture perfect.

Until one night when young Jenny Kramer is attacked at a local party. In the hours immediately after, she is given a controversial drug to medically erase her memory of the violent assault. But, in the weeks and months that follow, as she heals from her physical wounds, and with no factual recall of the attack, Jenny struggles with her raging emotional memory. Her father, Tom, becomes obsessed with his inability to find her attacker and seek justice while her mother, Charlotte, prefers to pretend this horrific event did not touch her perfect country club world.

As they seek help for their daughter, the fault lines within their marriage and their close-knit community emerge from the shadows where they have been hidden for years, and the relentless quest to find the monster who invaded their town - or perhaps lives among them - drive this psychological thriller to a shocking and unexpected conclusion.

All Is Not Forgotten is definitely not meant for the faint at heart, especially when details about gruesome events started to unravel. I barely made it through some parts and had to step away from the story at times to take a breather. That said, I did end up liking it because it kept me both intrigued and eager to learn how things would work out for each character.

Many readers might find it disappointing that the story is narrated by someone other than Jenny, and even I was a bit bothered with that because I wanted to see things from her point of view; get inside her head, feel her emotions, and better connect with her. But if you can see past that, you'll delve deeper and discover how everything related. You may even say it came full circle.

So the story went like this:
After Jenny's attack, her MOTHER (because the father was pretty much ignored and overpowered in the decision-making) agreed to have doctors give Jenny a drug that'll block the memory of her assault. Mrs. Kramer believed it was best for Jenny to forget what had happened in order to go on living a normal life. But in all honesty, the mother was thinking about herself and wanted to put it all behind her. See Mrs. Kramer had issues of her own and she was used to sweeping things under the rug and dealing with them in other ways. I don't want to give those issues away, but throughout the story, we're told how unfair it was to judge the mother for her behavior and the way she treated her husband. That was hard for me, even as the story progressed and we learn more about her past. Her character was just too intolerable.

Not saying the father didn't have issues of his own. The narrator explained a lot about both of Jenny's parents and I understood how certain factors in their upbringing contributed to who they were now as adults. Jenny's father never seemed to stand up for himself. I got mad at him for that, always letting his wife control things the way she did. But once details about his life were revealed, I totally got it from a psychological standpoint. And really, you just had to look at things in that way as you read, so you could understand these messed up characters.

As for the narrator, he came into the picture after the parents sought out help for Jenny. And his conclusion was to help her remember the terrible night, because even though they'd used the drug to block the memory, the emotions were still there. Jenny knew something had happened to her and she still had a hard time coping, no matter how her mother pretended everything was fine. Besides, the police had no suspects and no leads. It was imperative that Jenny remembered, not only to deal with it properly but to find the monster before it happened again.

A lot transpired once Jenny started seeing the narrator. We uncovered more about his character and family. And another client's life entered the story. A soldier who was also given the drug. He and Jenny began spending time together, relating emotions and situations. And a good chunk of the story was spent on understanding this other person. At first, I was like, "why is he being mentioned?". Then we're told about all the things he'd dealt with and how a dreaded experience in the military had caused him to have PTSD. Hence, why he was given the drug.

So much went on in the book and the more I read, the more I got pulled in, especially when something started to seem off about the narrator. When it became clear what that was, he certainly shouldn't have continued seeing Jenny, much less speaking to the police.  But he did. And with his involvement in Jenny's situation and what he'd stirred up for her mother and father, along with the soldier, it was almost mind-blowing. I couldn't believe the manipulation and how he was able to keep it all together. Then again, he had a dark secret that he'd kept for years. And by the end of the story, like me, you'll even hold him accountable for a lot that had happened.

Overall, this one was intriguing and made an impact on me in the sense that you never know what some people are going through, what they could be hiding. Sometimes sinister, sometimes gruesome. I wasn't expecting the story to be told in the way it was, based on the blurb, and I'm not too happy with the ending. Regardless, it's still worth the read.

About the Author
Wendy Walker is a practicing divorce attorney in Fairfield County, Connecticut who began writing while at home raising her three sons. She published two novels with St. Martin’s Press and edited multiple compilations for the Chicken Soup for the Soul series before writing her debut psychological thriller, All is Not Forgotten.

Posted by Shane @ItchingforBooks at 1:35 AM