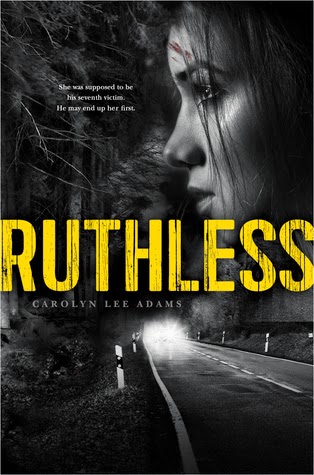 A spine-tingling debut about the ultimate game of cat-and-mouse in reverse as a teen struggles to retain hope—and her sanity—while on the run from a cunning and determined killer.

Ruth Carver has always competed like her life depends on it. Ambitious. Tough. Maybe even mean. It’s no wonder people call her Ruthless.

When she wakes up with a concussion in the bed of a moving pickup trick, she realizes she has been entered into a contest she can’t afford to lose.

At a remote, rotting cabin deep in the Blue Ridge Mountains, Ruth’s blindfold comes off and she comes face-to-face with her captor. A man who believes his mission is to punish bad girls like Ruth. A man who has done this six times before.

The other girls were never heard from again, but Ruth won’t go down easy. She escapes into the wilderness, but her hunter is close at her heels. That’s when the real battle begins. That’s when Ruth must decide just how far she’ll go in order to survive.

Back home, they called her Ruthless. They had no idea just how right they were. 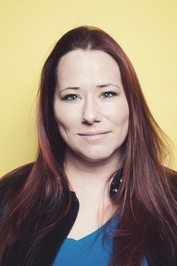 Carolyn Lee Adams is originally from the Seattle area, breeding ground of serial killers and those who write about them. She attended USC Film School and graduated with a BFA in screenwriting. RUTHLESS (Simon Pulse, Summer 2015) is her first novel. When she isn't exploring the dark side of human nature in her writing, you'll find her on stage as a stand-up comedian. Because those things go together.

*The fact that this is a debut novel is already exciting, but I'm very intrigued by that alluring blurb and cover. I like how it gives off the idea that this protagonist is strong and I'm curious as to how she evades this lunatic and how he'll be dealt with it.