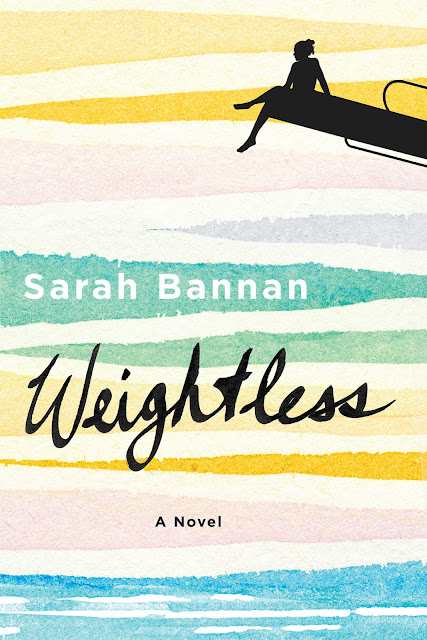 When 15-year-old Carolyn moves from New Jersey to Alabama with her mother, she rattles the status quo of the junior class at Adams High School. A good student and natural athlete, she’s immediately welcomed by the school’s cliques. She’s even nominated to the homecoming court and begins dating a senior, Shane, whose on again/off again girlfriend Brooke becomes Carolyn’s bitter romantic rival.

When a video of Carolyn and Shane making out is sent to everyone, Carolyn goes from golden girl to slut, as Brooke and her best friend Gemma try to restore their popularity. Gossip and bullying hound Carolyn, who becomes increasingly private and isolated. When Shane and Brooke—now back together—confront Carolyn in the student parking lot, injuring her, it’s the last attack she can take.

Sarah Bannan's deft use of the first person plural gives Weightless an emotional intensity and remarkable power that will send you flying through the pages and leave you reeling.


*Received physical ARC from the publisher in exchange of an honest review.

Weightless has some serious issues that can't be written about enough. I was literally sick to my stomach throughout the book with the way these kids, and the adults, acted. Not only with the bullying, but there was also racial discrimination among other things that made me cringe. The whole time I was reading I kept thinking how vain and ignorant these people were. How ridiculous it was that they valued materialistic things and in their twisted and oblivious minds believed that it was okay to treat people like that. There aren't enough words on the planet to describe their shameless behavior, and the sad thing about it is that this is reality. Horrible things like this happens everyday.

For Carolyn, her level of emotional and mental torture heightened by the day. When they weren't slut shaming the poor girl, they were physically putting her through hell. I wanted so badly for someone to stand up for her, for someone to try and help. Carolyn needed it. She was screaming loud and clear but no one offered. Outsiders were too busy feeding into the gossip and turning a blind eye. Even the narrator, which was never named, was caught up in the nonsense and whenever they'd witness something happening to Carolyn they never did anything. Yet they claimed they liked her and wanted to be her friend. They even blamed her for what others were doing to her, basically saying she caused it on herself.

Again, there are many deplorable things that happened in the story and that makes Weightless worth the read. The writing is great and I like how the author painted a clear picture of this small town setting and how these people lived. But my biggest issue was with the wordiness and often times I felt disconnected and had to stop reading for a while. But aside from that, this book is the epitome of real. The emotions were definitely there. I mean, if I began to express how aggravated these characters left me I'd probably give too much of the story away.

All I can say is that Weightless is an intense read, and you should go in knowing that you won't like the narrator because even after what happened to Carolyn, they never held themselves accountable and you just might barf at how they simply went on with their lives, which again is realistic because sadly, that sort of thing happens. And I'm afraid that no matter what, bullying is something that will continue to plague society. The question is, will you be like the people in this book and do nothing, pretend to be oblivious and go on with your life? Or will you stand up and make a difference?

Sarah Bannan was born in 1978 in upstate New York. She graduated from Georgetown University in 2000 and then moved to Ireland, where she has lived ever since. She is the Head of Literature at the Irish Arts Council and lives in Dublin with her husband and daughter.

Posted by Shane @ItchingforBooks at 8:49 AM