Review: When the Saint Falls (Westbrook #1) by A.D. McCammon 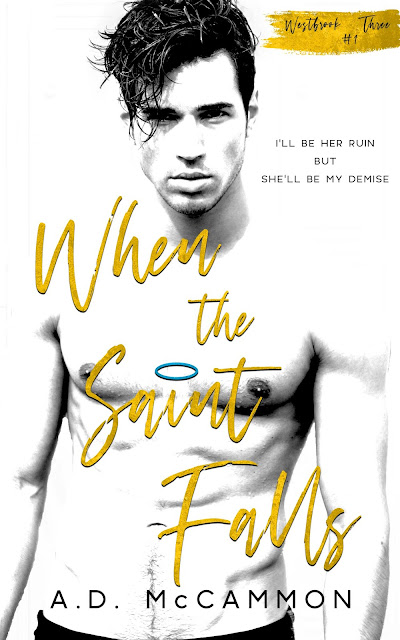 
Thatcher Michaelson is a bully.
Arrogant. Cruel. Ruthless.
And the most attractive guy I’ve ever laid eyes on.


He’s the rebel of Westbrook high, and I’m merely the annoying goody two-shoes he dubbed the saint.

There must be something wrong with me. After nearly two years of dirty looks and constant humiliation, I’m still crushing on the guy who hated me on sight.

Then he kissed me and instead of the ice-cold gaze I was accustomed to, I saw passion burning behind his dark molten eyes.


She doesn’t just look like an angel, she is one. And I’ve fought every impulse to make her mine.

But all my efforts went up in flames the second I tasted her sweet lips. My inability to stay away has changed everything.

She’s determined to break down all my walls, but my little saint doesn’t understand the consequences of her actions.

She tells me she’s not afraid of the fall.

But she should be.

*Read the ebook via Kindle Unlimited.

This is going to be fairly short because I'm not sure how to write my review without giving too much away. So, here goes:

I liked the story. It's high school, at times silly, but overall an enjoyable read.
I was pulled into the story instantly and wanted to see how it would play out. It certainly felt like a game between the two, one of burning lust and longing. And the main characters have their moments where I either love them or want to snap at them.

Thatcher and his friends pretty much ran the school, and kept guys from bothering Violet. She'd get annoyed at his possessiveness, but on the other hand, couldn't deny her pull to him. There were times I'd yell at them to just admit their feelings, and when things were finally starting to smooth out, I would get frustrated with Thatcher's back and forth and Violet's insecurities. The latter was mainly fueled by Thatcher's behavior. Once I understood what he'd gone through and got a clearer picture of his home life, it all made sense.

Again, it's an interesting read and my emotions were all over the place. But I still liked how things worked out in the end, and I'm looking forward to Arwen and Cole's individual stories next.

Amber McCammon decided to take her passion for writing to the self-publishing world in 2017. She's since published four contemporary adult romance novels and is currently working on a YA romance series.

When she isn't writing, you'll find her reading, spending money she doesn't have in Target, or hanging with her hubby and two kiddos.

Amber lives in Tennessee, where she was born and raised, which means she often gets caught with the south in her mouth. She loves to travel, though, and dreams of being a nomad one day.

Posted by Shane @ItchingforBooks at 6:13 PM