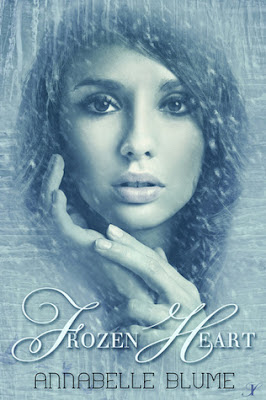 by Annabelle Blume
ebook, Paperback
Expected publication: August 7th 2012
Publisher: InkSpell Publishing
*ebook gifted by author in exchange for an honest review.
Synopsis via Goodreads:
A decade surviving on her own. Three days with the enemy. Can love conquer all?
Cressenda knows how to survive. With her sled dogs as her only companions, she’s spent the past ten years hiding in the snow covered wilderness from the oppressive regime of the Affinity. When a routine trip to civilization takes a turn for the worst, Cressenda is forced to take refuge with the enemy or lose her life to the frozen countryside.
But Beckett, a Guard of the Affinity, is more than a man in uniform. His desperate need to help Cressenda escape both- the blizzard and the Affinity- makes her feelings for him all the more troubling. Will Beckett be true to his word and set Cressenda free? Will her heart let her leave after all they’ve shared?
~My Review~
This was one quick read. When I say quick I mean done in two hours. The story was interesting though. The story depicts a time where everything is consumed by the cold but still a selective amount do their best in keeping the traditions of the green age alive; a world where little is available and in order to survive you have to be tough. I take it this is sort of a futuristic-disaster-stricken time where some are restrained and kept from the precious thing called freedom.
I picked up that the main character is like a badass living life her way but has no other choice but to do so. Cressenda is this strong girl with no human contact except for the companionship of her two snow dogs. I don't think I could do the things she did; the fighting, the hunting, her survival instincts are just remarkable. That fight scene in the first chapter still has me cringing and sending chills down my spine. That was just wicked!
What I liked about this novel, aside from the captivating cover, is the fact that the writing is beautiful, the scenes are graphic and pulling, and the story in itself is rather interesting. Many times we hear of enemies falling for each other despite their situation so that was very intriguing and well-kept alive throughout the book. The romance was enjoyable as well. We empathized with the character on learning what it means to be in love and care so much for another 'human'. She grows to understand what its like to have some kind of relationship and experience uncontrollable emotions. I thought that was pretty interesting.
I would say Frozen Heart is a great debut with wonderful writing. I can't stress enough on how awesome Annabelle's style is. The details were balanced not overwhelming; the descriptive nature of the story was compelling. The more you read, the more you develop a sense of what happened and what's taking place at present. In conclusion, totally awestruck!

About the Author:
Annabelle is a Science Fiction and Urban Fantasy Romance author. That is, when she's not checking homework or begrudgingly cooking dinner.
She's also the author/personality of The Bombshell Mommy at Vitacost.com, where she expounds her knowledge of being a vixen clad in sweatpants.