Review: King of Ash and Bone by Melissa Wright 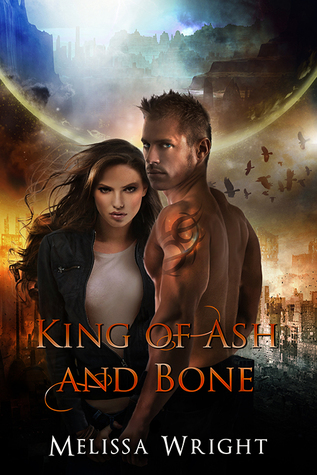 When flying monsters break through the veil into her world, Mackenzie Scott has nothing left to lose. Her brother has been taken, her future has vanished, and all that remains is a desperate need for revenge.

After discovering the breach the creatures used as a gateway, Mackenzie devises a plan to stop them, whatever the cost.
When she finds an injured stranger in the street, he just might be the key she needs to succeed. What Mackenzie doesn't know is that this stranger isn't the helpless boy he appears to be. He's one of the monsters. And he's got plans of his own.

Thrown into a dying city in another realm, Mackenzie is powerless to get back. With the gateway closing, time is not on her side. But the stranger is, and if they can escape execution, this girl and her monster might be able to save both their worlds.


*I received the kindle version as a gift from the author in exchange of an honest review.

King of Ash and Bone was an interesting read for me. At first I was a little confused by what was happening, but then once the story started to progress I began to understand the situation and who the invaders were.

I can't go into detail without revealing too much, but I can say it was tough, at least for me, to draw a conclusion as to what the dying realm should do. I mean, yes it was sad that their survival depended on claiming others, but it's not like they can decide to just fade away and not try to save themselves. Sure they were villains among them and I can't wait to see how things work out as the series develops, but otherwise, the creatures of the dying realm made sense.

Now let's discuss characters. Mackenzie came off as a very strong and determined young girl. She had lost so much but still risked her life to save Hunter, who was a complete stranger, and I applaud her for that, especially with what was going on around her. She's the kind of heroine that we don't see often in books and that alone is a plus for this story. As for Hunter, he was a mystery at start. His character was laced with intrigue and I wanted so desperately to find out his story. I'd suspected he was one of the creatures before that came to light and without even reading the synopsis, but there was still something about him that drew me in. I liked the revelations about himself and his realm when he came clean to Mackenzie. It was evident that he was one of them but I had no idea his position ran deeper.

The biggest twist for me was towards the end with Mackenzie. For a second there I was about to curse up a storm because I honestly thought this was it for her. Thankfully it worked out better and she was reunited with Hunter. It still gave me quite the panic though.

As for the overall story and setting, I could definitely envision everything that was taking place. The writing was clear and quick. Every scene painted a picture and I felt like I was a part of this frightening, urban fantasy world. It's a fascinating story that readers with an open-mind can enjoy. The only issue I had was the bit of confusion at the start and I think that the ending could have been stronger, even if the story will continue. Still, it was enjoyable for the most part.

I've worked with Melissa before and been wanting to read her books but never got the chance to set something aside. This is my first taste into how good of a storyteller she is and it certainly won't be the last.

Posted by Shane @ItchingforBooks at 2:36 PM